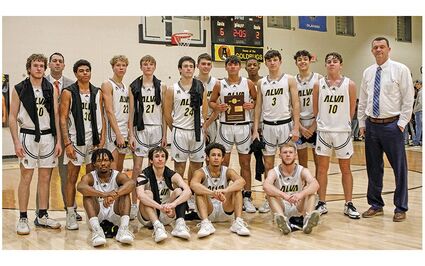 With one senior and two juniors on the team, the young Blackwell Maroons were no problem for the Alva Goldbugs Saturday night. Alva put away Blackwell 72-16 at home to win the district championship.

The victory sends the 22-2 Alva Goldbugs into the regional semifinals to take on the Hennessey Eagles next Thursday. Hennessey defeated Lindsay 54-44 to advance into the winners' bracket. Tip-off is set for 8 p.m. Feb. 24.

The Goldbugs racked up a 16-0 lead before Blackwell got on the scoreboard with a trey. Alva added two more baskets to lead 20-3 in the first quarter. Scoring was led by Kyler Penco with eight and Austin Reed with seven in the quarter. Jackson Feely put in four and Kaden Slater contributed a free throw.

Blackwell did a little better in the second quarter, scoring six points, but eight Goldbugs scored 21 points for a 41-9 Alva halftime lead.

Alva's starters took the bench for the rest of the game, but it didn't make much difference. The Goldbugs made 13 points in the third while the Maroons managed five.

During the final quarter, only one Maroon scored while the Goldbugs continued the onslaught with 18 for the final of Alva 72, Blackwell 16. 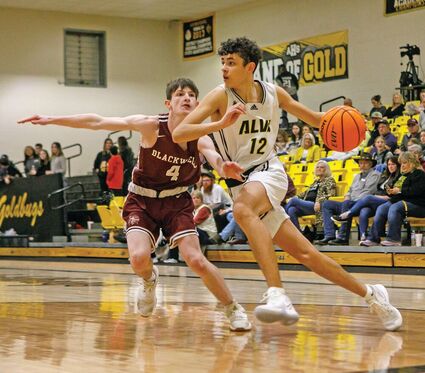 Alva's Kyler Penco (12) drives to the basket for two points early in the game against Blackwell Saturday night.

A host of Goldbugs scored points in the game. Penco led with 12 followed by Reed with ten and Chuck Shelite with nine. Weston Tucker scored seven points while Feely and Aiden Faison had six each. Slater, Daylon Malone, Drew Glass and Jordan Lohmann each had four points. Braden Hofen, Jaxon Jones and Philip Randall each had two.

The Maroons were led by Charlie Lux and Warren Gerboth with four points each. Davin Christian and Drake Hankins scored three each, and Kevin Rios had two.

Blackwell drops into the regional consolation bracket to play Thursday afternoon in Hennessey.