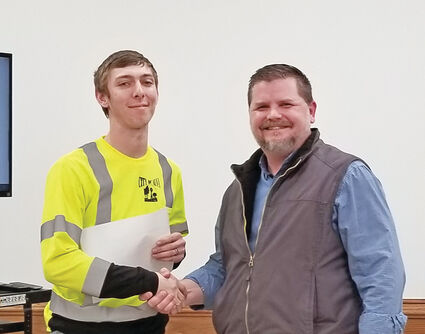 Drake Lewis, assistant water superintendent, was the only member of the City of Alva Water Department who came to the city council meeting Tuesday night. His reward was the presentation of a certificate of appreciation by Mayor Kelly Parker.

City Business Manager Angelica Brady told Lewis he will be receiving an extra day of pay, tickets for two to the Rialto Theatre for a movie, and dinner for two at the restaurant of his choice as long as it is in the city limits.

Other members of the water department will receive the same reward. The recognition is for their efforts in repairing the water line break at the river north of Alva. The crew spent several days working long hours in cold temperatures during the emergency. Then another break developed at Noble and Aspen that required an overnight effort to repair.