The history of Hatfield Park and the W.P.A. pool in Alva, Oklahoma 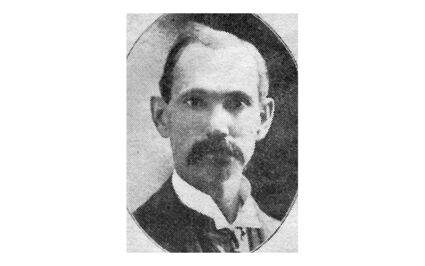 W. F. Hatfield, 44, newspaper publisher, as he looked when he published the Alva Pioneer Progress Ediiton in 1903.

Alva was established in 1893 with the opening, by the federal government, of the Cherokee Outlet for settlement by homesteaders. This "strip" of land comprised of approximately 6.5 million acres was formerly owned by the Cherokee Tribe. It was used by tribal members for hunting purposes, and the tribe leased it to various cattle companies, such as the Comanche Pool Cattle Syndicate. Cattlemen had formed the Cherokee Strip Livestock Association in 1883, with its headquarters in Caldwell, Kansas. The association negotiated with the Cherokee Tribe on behalf of the cattle syndicates for lease of the Outlet for grazing purposes.

The federal government purchased the Outlet from the Cherokee Tribe and, bowing to pressure from white settlers, President Benjamin Harrison and Congress planned the opening of the Cherokee Outlet by "Land Run," which was held on Sept. 16, 1893. Land offices were established by the federal government in the communities of Alva, Perry, Enid, and Woodward at which participants in the opening of the Outlet were required to register their claims after making "the run."

William F. Hatfield came to Alva in 1893 and established Alva's first newspaper, known as The Alva Pioneer. The Alva Pioneer was first located on the town lot now occupied by the Bell Hotel in downtown Alva.

Hatfield was active in civic affairs and was a founding member of the Commercial Club. He managed to purchase a quarter section of land on the northwest edge of town in 1906. Soon after, he deeded the land to the City of Alva to be used for a park, although some lots were sold to provide funds for park improvements.

Hatfield dammed the stream that ran through the property and formed Hatfield Lake. He planted hundreds of trees and shrubs, piped city water to the park, purchased playground equipment and built areas for picnics. He was the park's primary caregiver for many years.

Hatfield was honored by Alva citizens in 1930 with the dedication of a native stone pyramid memorial, adjoining planting beds, walking paths, and stairway on the west side of the park near the Flynn Street entrance. Clark Rackley was responsible for establishing the memorial to Mr. Hatfield, although the name of the stone mason has yet to be determined.

Approximately 1,500 Alva citizens came out for the Hatfield Memorial event on October 29, 1930. Mayor Grimm dedicated the native stone memorial and formally thanked Hatfield for his vision, and his contributions of land, labor and finances so that the City of Alva would have a recreational green space open to the public for many generations to come.

Since 1906, Hatfield Park has seen additional improvements, made primarily by volunteers who've raised funds for playground equipment and have kept the Hatfield Memorial maintained. Civic groups and Garden Clubs have added structures, trees, and shrubbery over the years. Hatfield Park has truly become a collaborative effort.

During the Great Depression, President Franklin D. Roosevelt established a number of federal agencies in a massive effort to put Americans back to work. One of these agencies included the Works Progress Administration also known as the W.P.A. The W.P.A. was instrumental in constructing a variety of public buildings, including armories, swimming pools, sidewalks, and schools across the country. In Alva, Jesse Dunn classroom building, Shockley Hall, and numerous campus sidewalks were built by the W.P.A. on the Northwestern Oklahoma State University campus. The original Armory was also built by the W.P.A.

The Alva Swimming Pool was a W.P.A. project as well and was completed in 1939. It was one of the largest W.P.A. pools built in Oklahoma. The pool is located on land donated to the City of Alva by W.F. Hatfield and adjoins Hatfield Park. Since 1939, the Alva Pool has enabled multiple generations of Alva residents the opportunity to learn to swim and has provided thousands of citizens and visitors with outdoor recreation opportunities. 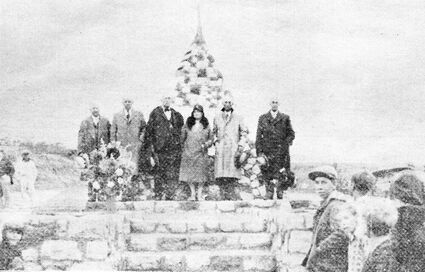 The Hatfield Park monument was dedicated October 20, 1930, honoring W. F. Hatfield who donated the park to the City of Alva. This is a scan from the 1936 Progress Edition of the Alva Review-Courier.

Various civic groups and volunteers have raised funds and provided labor to assist with pool improvements and maintenance projects over its lifetime. The pool has far exceeded its lifespan of safe functionality. The bath house and octagonal shade structure remain functionally feasible, however, and can be rehabilitated for future use.

The citizens of Alva have been the beneficiaries of William F. Hatfield's generosity and his civic-minded determination many years ago. With the combined efforts of the federal government and City of Alva management, the Alva City Pool was located on property adjacent to Hatfield Park, which was nothing more than wide open prairie prior to 1906.

Alva residents are encouraged to stay abreast of the ongoing work being done by the City of Alva and volunteers as plans are developed for an aquatic facility and additional park improvements. The Hatfield Park and Aquatic Facility will remain a viable outdoor recreation space for future generations of Woods County residents.

Very interesting article. Alva has a rich history. Thanks.