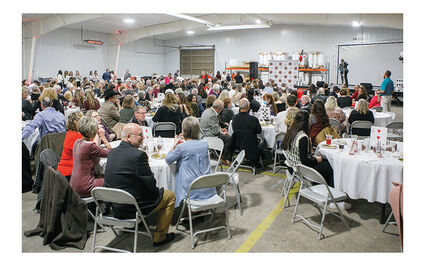 It was a night to remember as a crowd of about 400 people gathered at 4 Generations Organic to enjoy food and entertainment while honoring some of the best and brightest in Alva. A casino theme provided inspiration for the decorations. The Citizens Choice Awards Gala, hosted by the Alva Area Chamber of Commerce, opened with a sumptuous buffet and a cash bar.

Guests were invited to check out the silent auction items arrayed around the room while being entertained by Naicee Sutter and Isi Ofiu. The talented vocalists are graduates of Northwestern Oklahoma State University who teach music in local schools. Ofiu's daughter, age 10, joined him onstage for a surprise duet that charmed the audience.

Acclaimed keynote speaker, author, evangelist and award-winning teacher-coach Willie Spears was in Alva to talk with students in the Alva schools. After a day of encouraging and entertaining the youth of Alva, Spears filled his evening as the master of ceremonies for the Gala. A 2000 graduate of NWOSU and the leading receiver on the 1999 NAIA National Championship football team, Spears is well known in the community as well as knowing a lot about Alva and its citizens. He put that knowledge to good use in his comments, providing fun entertainment between award announcements. 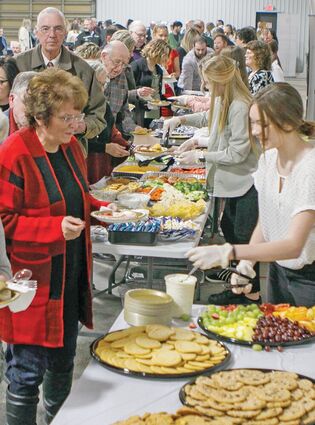 The Rainbow Girls glove up to serve food, catered by Alva's Market, to a long line of people at Thursday night's gala.

The top three nominees in each award category were honored during the evening. The program culminated with the announcement of the final winners:

• Citizen of the Year – Joe Phillips