Alva Goldbugs lose by one to Hennessey 48-47 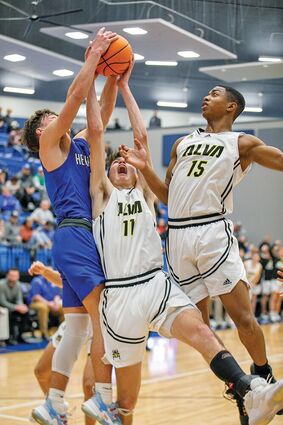 Seniors Jackson Feely (11) and Braden Hofen (15) go up with the Hennessey defense for the rebound.

The Alva Goldbugs traveled to Hennessey to face the Eagles on their home court Saturday. The start of regional playoffs was delayed twice by weather so teams had a lot of down time. The Eagles overpowered the Goldbugs in the first quarter, but Alva came back to lead by one at the half. The Goldbugs continued a narrow lead in the third but lost by one point in the fourth. With the 48-47 win, the Eagles continue to the finals on Tuesday night in Perry.

The Goldbugs now have to make their way through the consolation bracket to keep going. They take on Sperry Monday night at 8 p.m. in Perry. The winner of that game advances to the Tuesday final at 3 p.m. in Perry.

In the second period, the Goldbugs poured in 18 points while the Eagles had 12. Scoring was spread among several Goldbugs with Penco and Daylon Malone each hitting a trey. Reed had four points on baskets with Braden Hofen scoring two free throws and a basket. Feely and Phillip Randall had two points each. For Hennessey it was all Torres as he made ten points while Choate contributed two. The score was Alva 25, Hennessey 14 at halftime.

Hofen did a great job guarding Torres in the third quarter, entirely shutting him down. However, Rodriguez stepped up, making three treys and a basket. James Sims scored one point to make the 12 total in the quarter. The Goldbugs scored 14 points to increase their margin. Hofen made four baskets to lead Alva in the quarter. Also scoring baskets were Feely, Malone and Chuck Shelite. The Goldbugs led 39-36 at the end of the third. 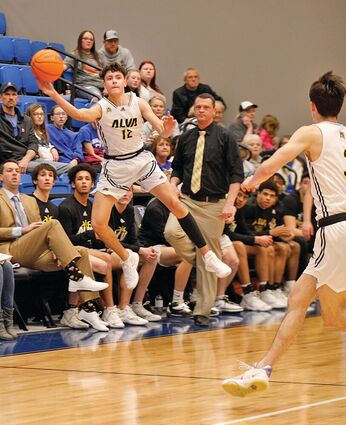 Alva junior Kyler Penco (12) saves the ball from going out of bounds and throws it to teammate Austin Reed.

Alva was held to eight points in the final period while the Eagles scored 12 to take the win in the last seconds. Feely had two baskets for Alva and Penco one. Penco also hit a couple of free throws. Rodriguez, Torres and Choate each scored baskets for Hennessey. Sims, Choate and Torres each made a free throw. Timmie Perry came off the bench to score a three-pointer. The final was Hennessey 48, Alva 47.

The Goldbugs are now 22-3 for the season while Hennessey moves to 15-7. The Eagles advance to the finals Tuesday night in Perry. The Alva Goldbugs have to keep winning from now on to continue in the playoffs. Alva meets Sperry Monday night at 8 p.m. in Perry. The winner of that game plays Tuesday at 3 p.m. for the chance to continue to area play.

Leading the Alva scoring were Penco and Hofen with 12 points each while Feely had ten. Malone scored five points and Reed four. Randall and Shelite each had two.

The Eagles were led by Rodriguez with 18 and Torres with 17. Choate had eight, Perry three and Sims two.