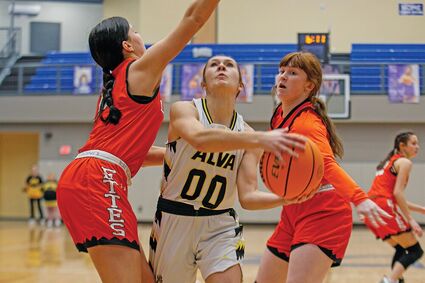 Alva freshman Lakin Gaddy (00) goes up for a basket despite being surrounded by the Leopardettes' defense.

The Alva Ladybugs lost by one point to the Lindsay Leopardettes Saturday night in Hennessey 41-40. The loss moves Alva into the consolation bracket of regionals. They will face Chisholm Monday night at 6:30 p.m. in Perry. The Ladybugs will have to win that game to continue in the playoffs.

After one quarter, it looked like the Ladybugs would have an easy time as they led 15-5. Morgan Heath scored six points in the quarter while Brooke Perez had five. Mary Kate Foster and Jaycee Kelln each scored a basket. Kamryn Perry was the only Leopardette to score in the first period with five.

Lindsay heated up from three-point range in the second quarter, cutting into the Alva lead with five treys, two from Perry and two from Kaylee Marcum. Taryn Phillips hit the other three-pointer. Canon Russell added a basket and two free throws while Chole Ince hit one from the charity stripe for 20 points in the quarter. Meanwhile the Ladybugs made only 12 points. Perez had two baskets and three free throws. Heath made one basket and one free throw while Lakin Gaddy scored two points. Alva led 27-25 at halftime.

The third quarter was relatively low-scoring with Alva adding only four points while Lindsay made seven to lead by one. Jaycee Kelln had the only Ladybug basket in the quarter. Perez and Chloe Durkee each contributed a free throw. Meanwhile Marcum sank another trey for the Leopardettes while Phillips and Emily Stone each scored a basket. Lindsay led 32-31 at the end of three quarters. 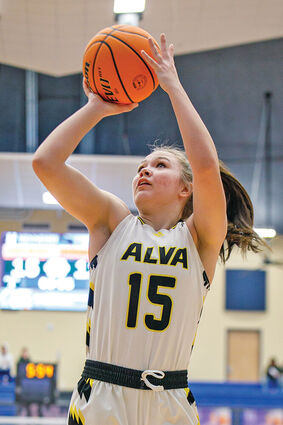 The lead switched back and forth in the fourth period. At one point, the Ladybugs led by three points, but Lindsay hit a last second basket to win by one point 41-40. Kelln made two baskets for Alva in the quarter while Foster hit one. Gaddy had two free throws and Durkee made one. Lindsay also scored nine points in the last quarter with Perry scoring five while Russell had two. Phillips and Madi McGowan each contributed a free throw.

The Ladybugs are now 16-9 for the season. Perez led the Ladybugs with 13 points for the game while Heath had nine and Kelln eight. Gaddy and Foster had four points each, and Durkee had two.

The Leopardettes were led by Perry with 16 followed by Marcum with nine. Phillips and Russell each had six while Stone had two. McGowan and Ince each made one point.

Lindsay will take on the winner of the Washington vs Perry game Tuesday night with both winner and runner-up heading to area play. The Ladybugs meet Chisholm at 6:30 p.m. Monday in Perry to determine who will advance to the final on Tuesday at 1:30 p.m.