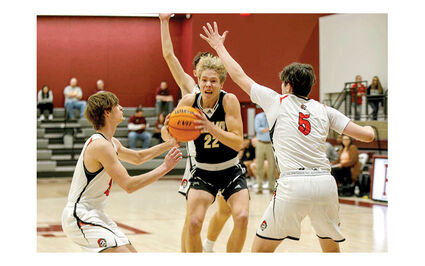 Weston Tucker (22) surrounded by the Sperry defense but still manages to take a jump shot.

Following a one-point loss to Hennessey Saturday, the Alva Goldbugs were ready for battle as they took on the Sperry Pirates Monday afternoon in Perry. The Goldbugs jumped to an early lead and emptied their bench in the second half, winning 92-48.

The Goldbugs went on an 8-0 scoring run to open the game and continued the onslaught. By the end of the quarter, Jackson Feely was already in double digits with ten points. Kyler Penco had six points, and Weston Tucker made five off the bench. The Goldbugs led 32-17 at the end of the first quarter.

The second period was more of the same as Alva scored 24 points to 11 for Sperry. Senior Kaden Slater led the Alva boys with six points for the quarter off a couple of treys. Jaxon Jones was right behind him with five. At halftime, Alva led 56-28.

Coach Shane Feely kept pulling in more players off the bench in the second half, but the Goldbugs still doubled Sperry's points 20-10 in the third quarter. Feely and Tucker each hit a couple of three-point shots while Austin Reed and Drake Wharton hit one trey each. The only two-point Alva basket in the quarter was by Jones. Alva was up 76-38 at the end of the third quarter.

A whole new set of Goldbugs scored in the final period with Jordan Lohmann leading the way with eight points. The Alva team racked up 16 points while holding Sperry to ten for the final of 92-48. 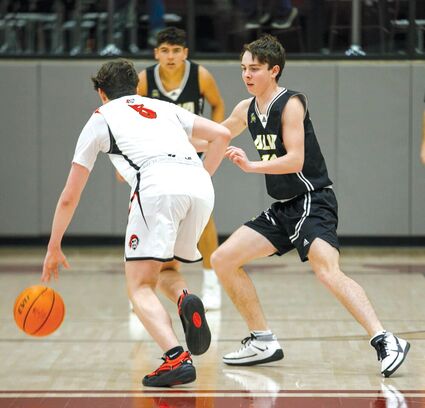 Jordan Lohmann (10) guards the Sperry offense as he tries to get down court.

Leading the Goldbugs in scoring was Feely with 16 followed by Tucker with 15 and Reed with 11. Penco and Lohmann had eight points each. Jones made seven, Slater six, and Phillip Randall five. Drew Glass had four points, Braden Hofen three and Wharton three. Chuck Shelite, Aiden Ruiz and Aiden Faison had two points each. The Goldbugs scored on 15 three-point shots with Feely making four of them and Tucker three.

The Pirates were led by Ethan Brown with 19 points and Carson Hendrix with 12. Grant Goodell had five points while Dylan Whitely and Tobin Brummett scored three each. Dawson James, Charles Green and Dakota Angileski each had two points.

The win sent the Alva Goldbugs into the regional consolation final to face the Perry Maroons on Tuesday afternoon in Perry.