Ladybugs advance in area with win against Purcell 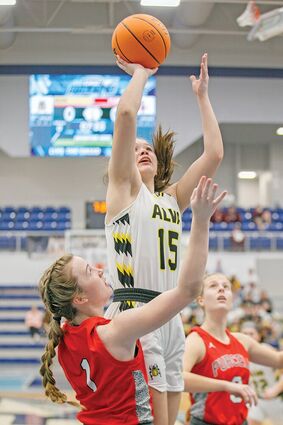 After defeating Washington on Tuesday, the Alva Ladybugs had a one day break. They headed to Enid Thursday night to play the Purcell Lady Dragons in the first round of the area tournament. Alva got off to a great start in the first quarter but Purcell came alive in the second to narrow the score. After a low-scoring third quarter, the Ladybugs held their lead to win 38-28.

The victory sends the Ladybugs into the second round game against Community Christian this afternoon, March 4, at 1:30 p.m. in Enid. Community Christian defeated Lindsay 44-30 on Thursday. The winner of that game will advance to play the loser of the Friday night Perry vs Luther contest on Saturday at 6:30 p.m. for a chance at state.

In the first quarter, senior Ladybug Brooke Perez soared over the Lady Dragons to put in eight points. She also accumulated two fouls and sat out the rest of the half. Chloe Durkee sank a three-pointer, Mary Kate Foster hit a basket and Jaycee Kelln put in two free throws for Alva's 15 points. The Purcell girls were held to the two points by Lauren Holmes.

In the second period, the Ladybugs managed only four points, a basket from Kelln and two free throws from Durkee. Meanwhile the Lady Dragons hit three baskets and a couple of free throws for eight points. Alva still led 19-10 going into halftime. 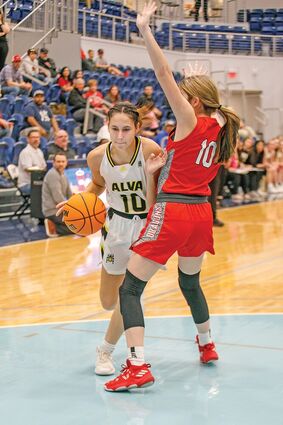 Hallie Hamilton (10) drives to the basket with the Purcell defense trying to stop her.

Alva's scoring drought from the last part of the second quarter extended into the third, but Purcell wasn't scoring either. Alva freshman Lakin Gaddy finally hit a jumper. Hadleigh Harp scored for a basket for the Lady Dragons. Then Hallie Hamilton sank a three-point shot giving the Ladybugs a 12 point lead. At the end of three quarters, Alva led 24-12.

Purcell worked at keeping Alva from the basket, committing a lot of fouls. Alva managed only two baskets in the fourth quarter with the remaining ten points coming at the free throw line. The Lady Dragons put 16 points on the board, including two treys, but they could never take the lead. Alva finished on top 38-28.

Perez led the Alva scoring with 12 points followed by Durkee with nine and Foster with six. Kelln and Gaddy each had four points and Hamilton had three. The Ladybugs were 16 of 23 from the free throw line.

Purcell scoring was led by Harp with eight while Katelyn Eck had six and Kenna Esparza four. Jaiden Avila and Tinley Winters had three each. Holmes and Ella Resendiz had two apiece. The Lady Dragons were six of 11 from the foul line.