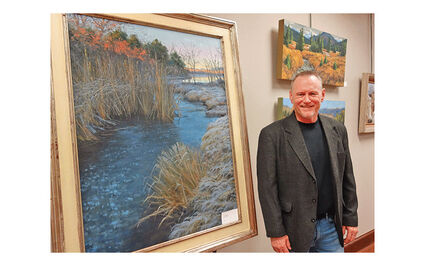 While he's always painted, Wes Newton of Oklahoma City now works full time on his art His oil paintings are on display during March at Graceful Arts Gallery in Alva.

Wes Newton's journey to becoming a successful artist began in childhood, blossomed in the mountains, survived another career and is now a full time pursuit.

The Oklahoma City painter grew up in Moore where he graduated from high school in 1981. His interest in art began "because my dad dabbled with painting." Newton was always drawing, and he had friends who liked to draw. Many rainy afternoons were spent inside with his friends drawing monsters, superheroes and other subjects that interest young boys.

"I just kept doing it and developing it. I never knew what I would do with it, but I just knew at some point in high schools I would do art," he says. He thought he might be a commercial artist but really had no idea of the possibilities.

Newton received a scholarship to the University of Science and Arts of Oklahoma in Chickasha where he received a well-rounded education but specialized in art. "I enjoyed watercolors. I ended up being a pretty good watercolor student and enjoyed that, but it became very challenging," he said.

But he realized that this, like many things in life, was all about attitude. About his third year of college, he decided he was not going to let oil painting defeat him. He was going to learn it.

"With a change of attitude, I started picking it up. Eventually after college, the oils started picking up and gaining speed and watercolors started fading out. I found that I loved to do oil painting," he said.

Newton gives credit to his college professor Hollis Howard for helping him toward an art career. "I just loved the guy, and he was really inspiring," he said. "He pushed me to enter some shows in Oklahoma and locally. I'd enter some shows, and I'd win some ribbons, some awards. That kind of sparks the interest. It kind of makes you like, 'This is fun. This is fun.'"

An introduction to plein air painting provided inspiration for his art. Newton enjoyed being outdoors and painting what he was seeing.

"I'd go to Colorado and do some plein air events. We did a lot of plein air in college in the summer. It was kind of introduced then. And I always enjoyed being out in the mountains so that was a good thing for me," he said.

About a year after college, Newton was living at home with his parents and trying to get his art going as a career. It just wasn't paying enough. So he decided to follow in his dad's footsteps. He became an Oklahoma City firefighter. The 24 hours on and 24 hours off work schedule allowed him time for art.

When people asked what he did for a living he would answer that he was a firefighter for a living, but he lived for art.

"I definitely would have rather been the artist full time. The check was nice. I enjoyed the checks coming in, and I could do some traveling to go paint. It was challenging, but it was rewarding in its own way," he said.

After retiring from firefighting in 2012, Newton has been painting full time and going to a lot more plein air events in Jackson Hole, Wyoming. He enjoys painting in the Grand Tetons. A group of artists there provided companionship and inspiration. He also exhibited his work there. Tennessee was another favorite place to travel.

"But plein air is a different challenge, a different beast," said Newton. Even though I was pretty well established as an artist in the studio producing works there, it's a different beast going out in the field and painting on location. You're racing the sun, you're racing shadows, you're fighting mosquitoes, bugs, other animals," he said. "I've had a black bear come up to my easel and check it out. Of course, I backed away with my camera. I got some great shots of that!"

As for inspiration and learning, Newton mentions studying with Jim Wilcox who has a gallery in Jackson Hole. Through Wilcox he also met Wayne Wolfe. Both are exhibitors in the Prix de West show held in Oklahoma City. He also became friends with Scott Christiansen and attended some of his workshops. "He had a heart for teaching people and sharing his understanding. He was a big influence in what I was doing and simplifying some things."

But being in the Grand Tetons is the best inspiration. "Eventually I started doing some wildlife. I'd do a large landscape but I'd put in a bull moose or an elk. It's a part of nature, it kind of hitting two worlds – the wildlife and landscape. But landscape was my favorite."

In the last few years, Newton has become interested in old structures like barns and old houses. As he travels, he sometimes stops when his interest is caught by an old house. If possible, he'll go inside to explore. He enjoys "the feel of just knowing that old place had memories it had stored if it could just tell them."

"In coming out to this show I've seen some beautiful places that were very inspiring. I'd like to come back this way for that very reason," he said.

Newton said everything he paints is from his experience. He admits he has sometimes "borrowed" a picture to paint in some wildlife. "I'd see a landscape of mine and say 'That just needs grizzly' so I'd paint in a grizzly. It would be a small part of the painting but still be someone else's, and I didn't like that."

Eventually he traveled to a grizzly center in West Yellowstone. "I took a lot of shots of grizzlies. So most of the wildlife in my pieces were something I experienced. I still want it to be original. I want the experience to be original, and to share that," he said.

If you want to learn more about Newton's work and see more of his paintings, check his website at http://www.newtonartstudio.com. You can contact him through his email at [email protected]

"For those that can make a living at it, it's a dream come true," Newton says of his art. "It's a struggle for me. It's difficult. But it's something that I wouldn't trade for the world!"