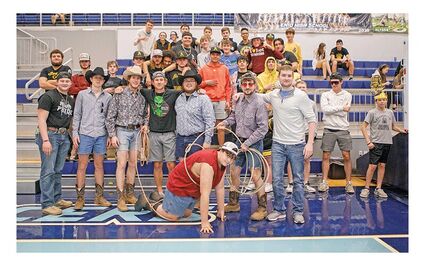 Alva students wear their best western wear in spirit for their Ladybugs against the Luther Lady Lions.

The Alva Ladybugs traveled to Enid for their fifth game in six days to face the Luther Lady Lions. It was an all or nothing area playoff for the chance to move on to the state quarterfinals. Judged on fan turnout, the Alva team would have won. Unfortunately, the Ladybugs fell short 60-42 to end their playoff hopes.

The Luther girls were fast and fierce, racking up 14 points in the first quarter. The Ladybugs had several good chances to score but the ball just wouldn't go in. Lakin Gaddy tied the score at three with a basket and foul shot. Brooke Perez hit the final two points of the period, but the Ladybugs were outscored 14-5 for the quarter.

The Lady Lions enlarged their lead in the second quarter with ten points while Alva managed six. The Ladybugs rallied when Chloe Durkee sank a three-point shot to cut the margin to six, but that was nullified when Luther followed with a trey. Since the Ladybugs couldn't get points otherwise, they started drawing fouls. Perez went to the line twice, making three of four tries. At halftime, the Lady Lions had widened their lead to 24-11.

Alva finally started getting some shots to fall in the third period, but Luther continued their fast-paced shooting. The Lady Lions had 19 points for the quarter compared to 12 for Alva. At the end of three quarters, Luther led 43-23. Chloe Durkee (22) looks for help from her teammates.

The Alva senior starters stayed in the game to savor their playing time for the black and gold. Coach Kris Gore emptied the bench as the game clock wound down to give other players a taste of playoff competition. Freshman Randee Perks took advantage to score a basket. Alaina Pierce hit a three-pointer to end the game. The Ladybugs outscored Luther 19-17 in the final quarter, but the Lady Lions held their lead to win 60-42.

The Alva Ladybugs finish their season with a 20-10 overall record while Luther goes into the state quarterfinals next week.

Perez led the Alva scoring with 12 points followed by freshman Jaycee Kelln who made ten points in the second half of play. Durkee scored six points on three-point shots. Gaddy, Hallie Hamilton and Pierce had three points each. Perks, Morgan Heath and Triniti Miller each made one.

The Luther girls had four players in double figures. They were led by Savannah Nunley with 15, Shawntae Silva with 13, Halyn Browning with 12 and Darcy Roy with 10. Addison Harris had five points, Harlee Jones three and Hailey Kuhlman two.