Expungement process in Oklahoma is long and expensive; legislature could change that. 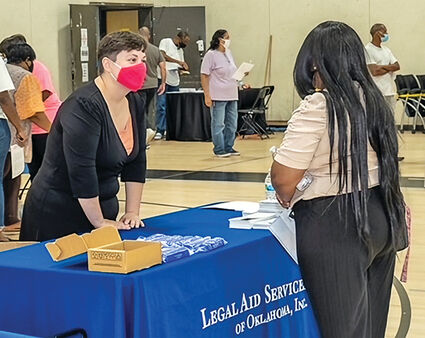 Hundreds of people lined up outside the Urban League of Greater Oklahoma City last August in 90-degree heat, hoping for a fresh start.

The advocacy organization was hosting an expungement fair aimed at providing resources and information to people with nonviolent felony and misdemeanor convictions. Expungement can help people with arrests or aging convictions pass background checks and secure stable housing and employment. Most don't take advantage of the relief it offers. The Oklahoma Policy Institute estimates that 93.5% of expungement eligible records remain unsealed.

The greatest barrier to expungement is cost, criminal justice reform advocates say. While it's possible to seek expungement without an attorney, the petition process is complex and typically takes months. The Oklahoma State Bureau of Investigation advises that applicants will be held to the same standard as a legal professional and "strongly suggests" that they hire an attorney.

"It is impossible to do this on your own," said Jabar Shumate, a former state lawmaker and the Urban League's vice president of community convening and social justice. "You can only achieve an expungement through the support of hiring a lawyer that would probably total you - if you had a very minimal case - around $1,500. Most cases could take up to $5,000 just because of the time involved, coordinating all of the agencies and getting all of the sign-offs."

The State Legislature is considering a solution that would leverage technology to make expungement more accessible. The proposal, House Bill 3316 by Rep. Nicole Miller, R-Edmond, would authorize the state to create a computer algorithm identifying expungement eligible cases and automatically initiating the records clearing process.

The bill unanimously cleared the House Criminal and Corrections committee last month and is eligible for a full House vote.

"I believe that government itself should not be in the business of erecting barriers to people getting on with their lives and being productive members of society," Miller said during an August interim study on expungement reform. Miller declined an interview request, saying that she was still finalizing the bill's language.

The push for expungement reform comes as individuals with criminal records struggle to find stable employment despite a national labor shortage. In some instances, they may be removed from consideration after disclosing their record or fired after the offense appears on a background check.

"I had a graduate in my office last week who was fired from her job because the background showed a deferred probation sentence, which is not a conviction," said Rachel Delcour, the criminal justice director for the Women in Recovery program in Tulsa. "She's coming up for expungement this year, but she's not eligible yet, so they let her go."

The central point of contention among lawmakers is often how far the reform should go. For example, half of the legislature may believe that non-conviction arrests and misdemeanors should be automatically cleared but draw the line at expunging felony offenses.

Oklahoma's proposal, which would not modify expungement eligibility but simply automate the process, has yet to receive significant opposition. A cross-section of statewide policy and advocacy groups, including the conservative Oklahoma Council of Public Affairs, Right on Crime and Oklahomans for Criminal Justice Reform, have expressed support for House Bill 3316.

"Republicans and Democrats can all agree that people who are no longer a threat to society, who haven't committed any sort of public safety violation for a certain number of years, deserve to live a full life," Kelley said.

If the Legislature approves House Bill 3316, Oklahoma could start creating its automatic expungement system by year's end. It would likely take at least one year to build the necessary technological infrastructure.

"You have to develop a software that will communicate across multiple systems across multiple counties," Kelley said. "What's great is that the Clean Slate Initiative is working with another group, Code for America, which will work with and advise state agencies about how they can successfully tailor their software to implement an automatic bill."

One benefit of Oklahoma's clean slate bill is that there's no break in automation from the initiation to completion of expungement, Kelley said. Arresting and prosecuting agencies would be notified of pending expungements and given 45 days to object. If no objection is made, the names would be forwarded to a judge for final approval. The records would be removed from public inspection but remain accessible to law enforcement.

Damion Shade, the justice and economic mobility project manager for the Oklahoma Policy Institute, believes the state could start automatically expunging records by 2024 if legislation passes this session. State officials could use American Rescue Plan dollars to fund the creation and maintenance of the system through 2026 at an estimated cost of $3 million to $5 million, Shade said.

"Of course, there will always be the cost to maintain that system in the future," Shade said. "But the law enforcement and court agencies that are involved in this, they're going to have to build new data systems anyways because their technology is super old."

The overall economic benefit of clean slate legislation far outweighs the cost of maintaining the system, proponents argue, as more people are able to secure higher-paying jobs. A University of Michigan study found that state's expungement recipients were 22% more likely to be employed and earned 11% more one year after their records were sealed.

For people with a prior conviction or arrest, expungement is a significant step towards moving on in life. But it's not always a catch-all.

Third-party background check websites may reveal criminal records that have been sealed for months. A Google search can turn up an old news article about an arrest - even if it never resulted in a conviction - long after the fact.

A handful of states are reviewing their contracts with third-party background check providers and stipulating that the data must be kept up to date, Kelley said. The process is far from flawless.

"In a perfect world, it would be quickly reflected that this record isn't usable anymore," she said. "But human error and human influence can derail the perfection that we're seeking in technology."

The third-party issue may not be as pressing in Oklahoma, Shade said, because most employers in the state use background check providers that pull records from Oklahoma State Courts Network and other open data sources. OSCN is funded through court fines and updated daily.

"As we upgrade and build these systems out, we will be able to affect the vast majority of education, housing and employment searches," he said.

A handful of media organizations allow people to request that a news article documenting a prior arrest or conviction be taken down. In 2018 the Cleveland Plain Dealer released a short web form that asks for a name, story to be taken down and an explanation for why. The Boston Globe and Atlanta Journal-Constitution have followed suit. Generally, articles about public figures or violent incidents won't be removed.

Who Stands to Benefit

Delcour, with the Women in Recovery program, has helped dozens of women navigate the expungement process.

The organization has built relationships with judges and public defenders in Tulsa, Creek and Rogers counties and typically has no issue scheduling an expungement hearing. Those who receive expungement through Women in Recovery might save a few thousand dollars in legal fees, but the long-term social and economic impact is even more significant, Delcour said.

"When someone has a conviction on their record or even a deferred sentence, those things are huge barriers to getting the job that really pays enough to live on or getting safe housing that requires a background check," she said. "We want to save people money, but more than that I want people to get better jobs and better housing and remove some of those barriers."

A significant benefit of House Bill 3316, Delcour said, is that it would apply to everyone in the state no matter where they were convicted and what resources are available to them.

"We have staff here who are going to help our women try to seek those benefits," she said. "But not everyone is in a program like ours."

With the assistance of pro-bono attorneys, Shumate said the Urban League is processing hundreds of expungement applications, a process that usually takes at least six months to complete. He hopes the organization soon won't have to carry such a heavy load.

"It has been an overwhelming process because of the way things are structured in this state," Shumate said. "I can guarantee you that once this bill passes, more agencies that help those that are justice-involved will be able to step up to the plate and help people because it's more achievable."