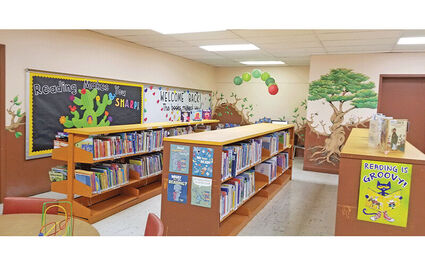 The juvenile library is open for younger patrons at the Alva Public Library. The downstairs section is colorfully decorated to welcome young readers.

The Alva Public Library is welcoming back patrons of all ages. After installing various Covid-19 protocols, the library has gradually opened selected areas in the building. One of the last is the juvenile library downstairs. Now youngsters can browse the shelves and select books on their own.

With the opening, the juvenile library has been freshly decorated and rearranged. Books are in new categories to facilitate selections according to reading skills and interests. A new color coding system designates these divisions and makes it easier to put books back on the shelves.

During the Alva Library Board meeting Monday, Library Director Sandra Hamilton said the Little Explorers preschool program will resume Tuesday, April 5, at 10 a.m. The program of reading and activities is open to preschoolers accompanied by a parent or guardian. The library also plans to open a take-home version for youngsters unable to attend in person.

During the first full week in April, the library will begin offering Lego club meetings on two different days. Students wanting to participate are asked to sign up at the front desk.

Board members were given a statistical report showing the number of checkouts, new materials and computer use. The library signed up 11 new patrons during February. Hamilton reported after a drop in juvenile checkouts during January, the numbers were increased last month. The library added 73 new adult materials, 46 new young adult materials and 75 new juvenile materials. They logged 63 uses of library computers and tablets. The library provides a free wifi service that people can access around the clock from outside or inside the building. They had 1,754 devices recognized during February.

Hamilton reported she completed the E-rate filing. The library will be able to extend their current contract with Pioneer for internet services. The federal government pays for 80 percent of the cost with the state paying for most of the remaining amount. The contract renews July 1.

The board members were given a proposed technology plan in January. Dowling asked some questions about the restrictions in place on the free wifi, but the plan was approved as written.

The juvenile library is open for younger patrons at the Alva Public Library. The downstairs section is colorfully decorated to welcome young readers.

The City of Alva departments are working on budgets for the next fiscal year beginning July 1. Hamilton said the library's preliminary budget is similar to the one for this year. She is expecting a flat budget. She said capital outlay projects will probably include either air conditioner replacements or roofing of the portico. A city budget retreat for city council members and department heads was planned for March 19.

The magazine area of the library, just south of the entrance, is now open with new seating. Patrons are encouraged to sit and read current issues from the shelves. Older editions may be checked out to read at home. The library is still quarantining returned items but they are considering removing that protocol.

Hamilton said somehow emergency problems always come up on a Friday. The previous Friday, March 11, about 5:15 p.m. she found water on the floor and down the walls in a storage area. The city sent someone to look at the problem. It was determined to be condensation from air conditioning. Dehumidifiers were set up over the weekend. The condensation issue will be handled with piping to divert the water into the sink drainage. Hamilton said nothing of value was damaged by the water.