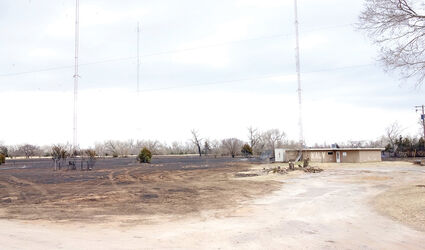 A fire north of Alva burned the KALV-AM radio building and threatened a home on Sunday. The fire was reported shortly before 5 p.m. at the city sanitation transfer station which is located about a half mile north of Alva on the south side of the Salt Fork River.

Driven by the strong winds, the flames jumped the river, sending fire units to cross the bridge and speed to the KALV site on Hughes Road. Fire spread under the radio towers and reached the back side of the KALV building which was unoccupied at the time.

When flames threatened a residence on the north side of the road, Eldon Doman was forced to evacuate. Although the fire came close, fire crews were able to keep the flames from reaching the house.

Doman said he may have been the first to report the fire. He saw smoke at the transfer site and drove across the bridge to investigate. Then he drove back home to call in the report.

Later when the fire threatened his home and he had to leave, Doman said he could hardly see the road because the smoke was so thick.

The fire was contained just before 6 p.m. although firefighters still had hot spots to extinguish.

Eventually, Doman was able to return to his home, but he had no water overnight. In the heavy smoke, one of the fire vehicles accidentally drove over an outdoor hydrant located where his driveway met the road. Water was shut off overnight.

Monday morning, three members of the Alva Water Department were at work digging out the hydrant and making repairs. As a precaution, they placed a metal fencepost between the hydrant and the driveway to better mark its location. Water service was restored.

The KALV building did not fare as well. Although the concrete block walls resisted the flames and are still standing, the fire attacked from the back of the building. The structure now has some holes in the roof and a lot of water damage. Flames, heat and water damaged some of the transmitting equipment which will have to be assessed and repaired before the station can broadcast again. 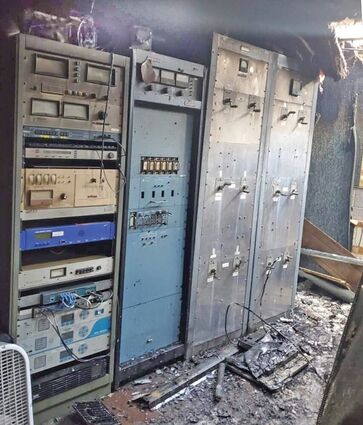 According to Federal Communications Commission records, KALV-AM is licensed to Blue Sky Media which also owns KRDR-FM in Alva. The owners decided to close down the AM station a couple of years ago. It was off the air briefly, but Ben Buckland, who worked at KALV during his college years, hated to see it end. The station is currently being operated through a lease agreement with Buckland, J.D. Ford and Grant Merrell involved. The partners have vowed to get the station back on the air.

City Business Manager Angelica Brady said during the city council meeting Monday night that the cause of the fire is under investigation. Although the fire started in the city's "burn pile" of tree limbs and brush at the transfer site, she said city employees did not start the fire.

Monday's rain has lessened the fire danger in the area. According to the Mesonet Tuesday morning, Alva received 1.31 inches of rain, Freedom has 0.98 inches and Cherokee measured 1.04 inches.