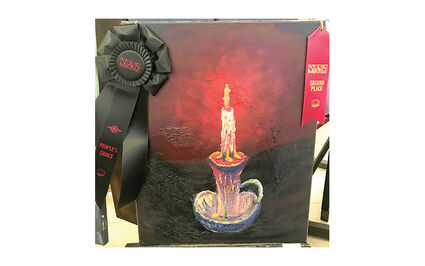 An oil painting by Alva sophomore Joshua Hinton will join several other pieces of art for a Winners' Only show during the First Friday Artwalk at the Runnymede in downtown Alva on Friday, April 1, from 6 to 8 p.m.

All of the winning pieces of art from the Northwestern Oklahoma State University Art Society Art Show will be on display in the Runnymede in downtown Alva for the First Friday Artwalk on Friday, April 1, from 6 to 8 p.m. for a Winners' Only Show, including a painting that was voted in as the People's Choice winner in the campus show.

An oil painting named "Candle" by Northwestern student Joshua Hinton, Alva sophomore majoring in mass communication, received the most votes from the viewing public and has earned a special ribbon and $25 cash prize. Hinton also earned a second-place ribbon on...