'Pushing paint across the canvas' 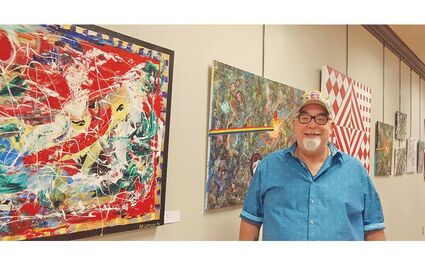 It's obvious that Brian Leffler loves bright colors when you see his exhibit at Graceful Arts Gallery in Alva. The self-taught artist is featured in the April exhibit titled "Post Modern Eclectic.."

How do you relieve boredom? Brian Leffler took up painting. The 62-year-old disabled veteran says he was growing bored and complacent, watching TV all the time. "I decided to buy a canvas, some paint and an easel and take up painting," he said. "It has led me to this point, my first art exhibition at the Graceful Arts Gallery."

Leffler was present for the First Friday Art Walk in Alva and the opening of his work in the "Post Modern Eclectic" exhibit. Wearing an 82nd Airborne Division cap on his white hair, the Oklahoma City artist talked about his few years in front of an easel. He began painting about seven or eight years ago and loves the way it allows him to express himself.

While he mostly paints with acrylics on canvas, Leffler's work includes some collages and some painted skulls formed from sugar. He uses bright colors and bold designs in his work.

Although Leffler took a couple of art classes in high school, he has no formal art training. He's never really thought of himself as an artist. "I can't really draw anything," he says with a smile. "Like I said, when I decided to try it, I just started pushing paint across canvas."

Other than his Army service, Leffler spent most of his early career working in the oilfield as a roughneck. He has worked in the food service industry and for the past 17 years has worked in hospital supply.

You can see Leffler's work on display this month at Graceful Arts Gallery in Alva. He's also active on Instagram as boomerva24.