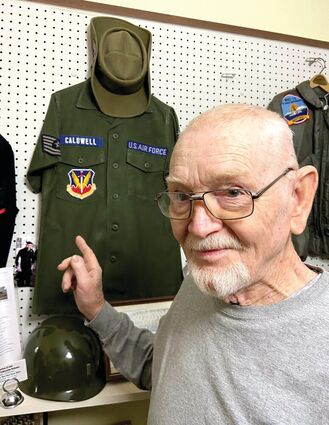 Vaughn Caldwell stands with his Air Force Uniform that he donated to the Cherokee Strip Museum.

The Cherokee Strip museum has benefited greatly from the labor, volunteerism and monetary donations of one man for over 40 years: Vaughn Caldwell. He joined the Air Force in 1955, where he served as air force aircraft communications repair man during the Vietnam War. He flew reconnaissance missions over the Ho Chi Minh trail, a military supply trail that runs from North Vietnam through Laos and Cambodia to South Vietnam. Caldwell flew 90 missions and rose to the rank of senior master sergeant during his 21 years of service, before retiring to return to Alva.

Caldwell's late wife, Karen, was related to several people that served on the museum board during the time the Alva General Hospital was transitioning to the Cherokee Strip Museum. His wife Karen, Vera Strasbaugh, Donna Schwerdtfeger and Joy Sherman asked him to do many various small jobs during the transition, thus beginning his many years of volunteer work that has continued over the last 40 years. This soon turned into a maintenance job at the museum that entailed anything and everything that needed to be done. He worked for the museum in that capacity for 12 years and then took a job as purchasing agent for the county where he worked for Eleanor Ring. He never forgot the museum and returned in 2001 as a board member.

Caldwell has left his mark on many places in the museum. While employed, he set up a workshop next to the fireside room and built 25 or more display cabinets with lights and glass doors to displays objects in the halls. He built a special cabinet for veterans' memorial plaques for the recognition displays. He also reupholstered the antique barber chair with a unique kangaroo hide.

Caldwell has been working on the yellow windmill that was donated by Bob Cook family from Hardtner, Kansas, and helped restore the schoolhouse, inside and out, that was moved in from Dacoma. He has landscaped, put in irrigation pipes and helped build the four individual equipment shelters outside the museum.

Caldwell helped set up the train room that was moved from the basement of Oscars Stovers' home. He works diligently on the trains to keep them running, and would like to teach someone to help maintain them.

Along with his military service, Caldwell has mentored under Al Kriegh, Stites Alva Electric, electrician, Buck Knabe, bricklayer, who built the barn and the annex and Dan Evans who worked on all buildings. This, plus his training in the service gave him the experience to fix just about anything.

For seven years Caldwell has been driving to Alva from Enid, where he now resides and volunteers one day a week He puts in about five hours working wherever needed. Recently, he has been on top of the roof installing cameras and pumps to keep the roof dry. He puts all the Christmas lights up, working from the roof and helps move and repair anywhere that is needed. Vaughn Caldwell has not only donated many hours of his time, he has donated much of the equipment he has installed. He just comes in, looks around to see where the need is, and does it.

Vaughn Caldwell's loyalty and dedication are what helps keep the museum growing and prospering. He certainly has helped make the Cherokee Strip Museum what it is today.