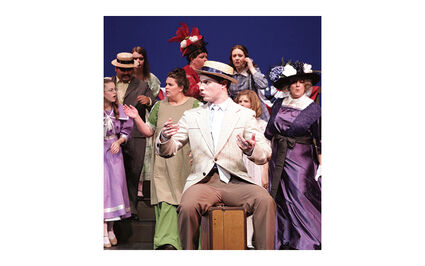 Sam Ginder of Sayre, sophomore vocal music education major, plays con man Harold Hill in the "The Music Man," based on a story by Willson and Franklin Lacey. "The Music Man" is scheduled for April 7-8 at 7 p.m. and April 9 at 2 p.m. in Herod Hall Auditorium on the Alva campus of Northwestern Oklahoma State University. 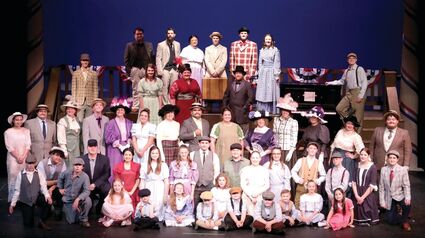 "The Music Man" is a musical with book, music and lyrics by Meredith Willson. The show is based on a story by Willson and Franklin Lacey. The plot concerns con man Harold Hill, who poses as a boys' band organizer and sells band instruments and uniforms to naive townsfolk before skipping town with the cash. In River City, Iowa, prim Marian the librarian sees through him, but when Hill helps her younger brother, Marian begins to fall in love with Harold. Harold, in turn falling for Marian, risks being caught to win her. More than 60 people have been in rehearsals, building set, getting costumes and stage props ready as the Northwestern Oklahoma State University Fine Arts Department prepares for "The Music Man" scheduled for April 7-8 at 7 p.m. and April 9 at 2 p.m. in Herod Hall Auditorium on the Alva campus.