Band of Gold has memorable experience 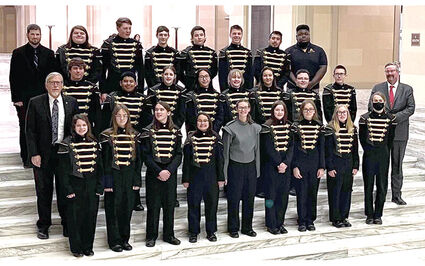 Band members of the Alva Band of Gold traveled to San Antonio, Texas, December 29, 2021, to perform during halftime at the Alamo Bowl and received the following awards:

On Monday, April 4, the Alva High School Marching Band students were recognized at the State Capitol by the House of Representatives for their outstanding achievements at the Alamo Bowl. Each band member received a Citation of Congratulations from the Oklahoma State Legislature and were also recognized at the State Capitol by House Representatives, Sen. Casey Murdock and Rep. Carl Newton. Newton said, "We usually only honor state champions, but we all thought this was worthy of special recognition."

Adam Steuart. Band of Gold director, said that his students had a fantastic day at the capitol and were excited to be honored for their accomplishments. "What an amazing experience these kids will remember for the rest of their lives. Go Bugs!"