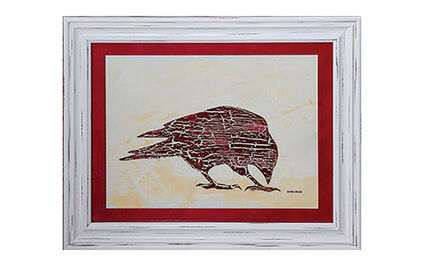 "Bread and Meat 1" by Bryan Dahlvang features a crow in crackled paint in OU crimson and cream.

Crows are super smart with the largest brain to body ratio of any bird. They mate for life, make tools and are mischievous. These are some of the reasons Bryan Dahlvang refers to the crow as his "spirit animal." His ties to crows are evident in many of his art pieces on display this month at Graceful Arts Gallery in Alva.

Growing up on a farm in Minnesota, Dahlvang remembers raising crows as pets. Each spring, he and his brother would climb to the tops of tall pine trees to find young crows. Through the summer, they enjoyed every moment with the birds because in the fall the crows flew away with others for the winter.

Dahlvang said he has been drawing since he was old enough to ride a school bus. He took a more serious interest in art while in high school, but shortly after graduation he joined the U.S. Air Force. He became a mainframe computer operator and a combat communicator. He spent two years in Wiesbaden, Germany and was deployed to England and to Turkey for short stints. Then his Air Force career took him to Omaha, Nebraska, to the headquarters for Strategic Air Command where he worked underground in a secure facility for intelligence.

Working rotating shifts was not conducive to taking college classes. After 6.5 years, Dahlvang left the military to pursue a degree. He began at the University of Nebraska, and later moved to Oklahoma City where he finished his bachelor of fine arts degree at Oklahoma City University in 1997.

With his computer experience and art degree, Dahlvang secured a position with the Federal Aviation Administration (FAA). He began in the multimedia department at the Mike Monroney Aeronautical Center and since 2000 has been a graphic designer.

In 2004, Dahlvang was chosen to design the new Airmen Certificate (pilot's license) when they became plastic and the Air Traffic Control Tower Operator license. The FAA even gave him "my very own plastic card that says I'm qualified as a graphic designer." It still hangs on his wall.

The Crow series began back in 2012 when Dahlvang won a competitive logo design contest for the Secretary of Transportation (Ray LaHood). While he was visiting Washington, D.C., he participated in an employee's art show, submitting a piece called "Bread and Meat." The piece was inspired by the Biblical story when God had crows bring bread and meat to Elijah while he was in hiding. It was created as a way to show students how to make paint crack using Elmer's glue. He made a collage crow from the swatch of paint, and that painting sold.

Although Dahlvang was happy to get the money for it, "I actually loved that piece." He took

a photo of the painting and printed it, but it wasn't like having the actual painting.

Recently, he was excited to participate in a group show based on the theme of "Home." Although he stayed up all night before the deadline, when the day arrived he was "busy with my job and ... life, and I missed the deadline."

"When I think of home, one of my favorite memories was raising crows as pets. I lived out in the middle of nowhere in rural Minnesota. I loved being out in the woods and taking care of my animals on the farm," Dahlvang. He was excited to enter his pieces entitled "OklaCROWma," but he was disappointed he missed the deadline.

When Jo Decker contacted him about showing at Graceful Arts Gallery, Dahlvang was happy to have a reason to create more crow paintings. He did a series of his "Bread and Meat" paintings with different Oklahoma sports team colors.

"Over the years I've done many paintings and drawings of crows," said Dahlvang. "I guess I identify with them because they're crafty, they collect things; they're funny and confident. Crows are intelligent survivors, and I love how they mate for life."

Although his exhibit at Graceful Arts Gallery is mostly collage combined with painting, Dahlvang enjoys a variety of mediums in his artistic endeavors. He has difficulty picking a favorite. "I love creating in various formats as the mood hits me, but there's nothing like the smell of a fresh oil painting on the easel. I love painting with watercolor, with acrylic and with oil," he said. "They're all different 'animals' but everything in my life depends on time. Oil painting is what I did my main thesis in, so I'd say if I had to pick one medium, it'd be oil painting. I'm getting closer to retirement, so I'm really looking forward to being able to have more time for the pallet knife. However, I'm also really happy when I'm putting found objects together, or making creatures out of skulls and sticks."

Dahlvang finds inspiration for his work in a lot of different things. "Light; a creative, stylized drawing; a song that I haven't heard in a while; my kids; insects; birds; road trips – just because. I'm not happy driving a long distance without being able to stop and find something to enjoy along the way," he said. "Lots of people want to just hurry and get there and back in a hurry. I don't like that. Guess I'm like Chevy Chase in the movie Vacation, where I'm looking for the world's largest ball of twine."

A Touch of Humor

As you view Dahlvang's exhibit in the gallery, you might chuckle when you check for the title. "I love to play with words," said Dalhvang. "I think the piece draws your attention visually, and when the viewer is up and close, he or she can find the surprise in the title. That might be the icing on the cake, so to speak, that clicks with the viewer. I love subtlety and letting my 'kid' make its own way in the visual realm.

"When I first started out, I used to stand by my paintings and explain things to people. But that backfired a few times when the person who was initially interested in my piece suddenly changed their mind altogether because it didn't mean the same thing to them after I'd explained it. So I've learned that the viewer needs to identify with the piece in their own way. Sometimes I love painting something just because. But it's more enjoyable to me to paint something that makes someone think. It's even more enjoyable when I can make them smile or laugh with a witty title."

Dahlvang used to teach a lot of different classes at the Oklahoma City Museum of Art and at metro libraries across the state of Oklahoma as well at at the Oklahoma Contemporary Arts Center. He taught basic drawing and introduction to painting including water media, portraiture and basics with oils. However, his most requested class was "Junk Sculpture."

"The kids just loved it. I enjoyed watching them come alive after I showed them examples of my work and showed them what they could do with broken toys or stuff you'd find laying around outside," he said. "I used to keep a lot of junk from garage sales in addition to things that people would bring to me for my classes. I'd haul about five bins into the classroom on a dolly and would dump them all out on table for the kids to rummage through. 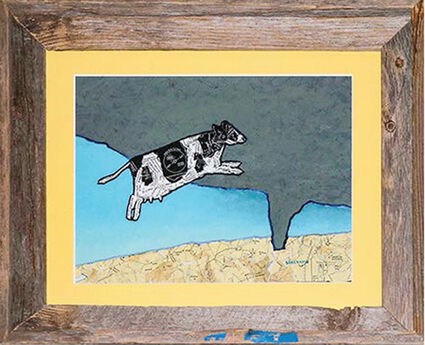 "Cow TPP'n" by Bryan Dahlvang is done in collage and acrylic. It is one of the pieces on exhibit this month at Graceful Arts Gallery in Alva.

"I set up several hot glue guns in the back of the classroom, and then I sat up front with my power tools to disassemble things for the kids to use. Most of the time they wanted to create their own action figure. So I used the Dremel tool to cut toys apart for their limbs and heads. I was very impressed by ideas and raw creativity."

Referring to how crows mate for life, Dahlvang says he's been married for 33 years to his beautiful wife Sharra. "I am one of the luckiest guys on the planet," he said. He and his wife live in Oklahoma City with their daughter Madchen who is "an amazingly talented artist herself."

A visit to his website at bryandahlang.webs.com will give you a chance to see Dahlvang's wide-ranging interests in art with graphics, watercolors, oil and acrylics, composites and photography.

Dahlvang spends his working hours as a photographer, videographer and graphic designer for the FAA, but "my real love is just going out in nature and waiting for things to come by."