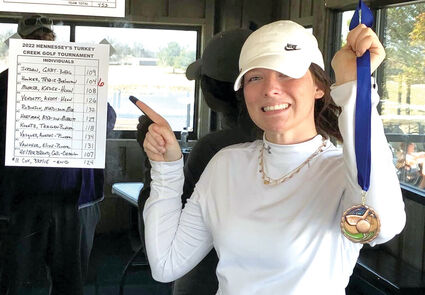 Burlington has a girls golf team for the first time this year. The sole participant is junior Teddie Hooker. Teddie has been playing golf since the eighth grade. She played in Olive, Oklahoma, and for two years at Lindsay, Oklahoma.

So far this year, Teddie has placed in three of the four meets she has played, all of which had a field of around 50 competitors. She placed third in Alva, fourth at Meadowlake and sixth at Hennessey.

Teddie will compete in the Regional Qualifier on Tuesday, April 19th, where the top six individuals will move forward. She feels a little pressure being the only...