Legislators explain the process of pushing a bill into law 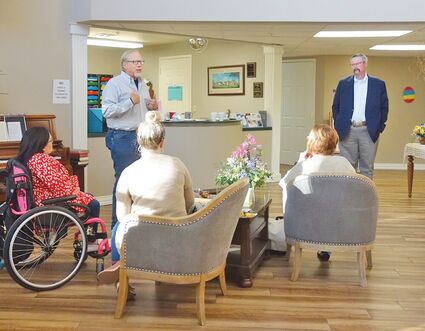 The Homestead retirement living hosted the Alva Chamber Community Coffee Friday morning. Alva Mayor Kelly Parker who is involved in managing the facility said they are coming up on their 25 year anniversary. He welcomed the visitors and spoke briefly about the benefits of living at the Homestead, suggesting those present come out for a meal sometime.

An inviting breakfast buffet was arranged at one end of the lobby, which was decorated with spring and Easter colors. After eating, everyone settled into the comfortable living room style seating to hear from legislators.

Representative Carl Newton says the legislature is about three-fourths done with the bill process. House-authored bills are now in the Senate, and Senate bills are being considered in the House. Bills are done with the committee process other than budget bills.

Newton explained how getting a bill through the legislature works. "When I start a bill out, I call it my baby. It's mine," he said. "A lot of times lobbyists or those who want to kill it will not do much of anything until it gets in the opposite house."

He said a lot of younger members of the House will say, "I don't know why they kill all my bills over in the Senate." Newton explains, "You don't have ownership of it anymore. You need to pick a better senator." He said he picked out good people who will take ownership like Sen. Casey Murdock. He said he does the same when Murdock sends a bill to the House.

Through the process, Newton said, the 2600 bills at the beginning are now down to about 600. Murdock added, "You didn't want all those 2600 bills passed. There's some bad stuff in there."

"It's kind of funny. I'm winning an award from one group because I voted against a bill," Newton said.

He said the legislature is still working on the budget. They are trying to regulate medical marijuana. "And then we're working on some of the school protests. Does Alva have a protest?" Newton asked, drawing wry laughter from Woods County Assessor Renetta Benson. She said they have a few.

Newton explained that oil companies are among the protesters as well as wind farms that are coming off the state incentive money. He said, "It would be alright if they protest for three months, but we have some that are going four and five years." The legislature is trying to find a fair way to speed up the process.

Senator Casey Murdock said he wished he had been able to attend the last Community Coffee in Alva. With snow in the forecast, he decided to head home to Felt to take care of his cattle. "I wish we had gotten more snow. All the snow was between me and home, I think. We had a horrible blizzard, and we didn't get a quarter inch of moisture, and I lost a cow and baby calf," he said, throwing up his hands in frustration.

"The capitol this year on the Senate side, is a little ... we're having an issue. We're all of us in a family, but right now we're dysfunctional as heck!" Murdock said.

Speaking earlier at Woodward, Murdock said, Newton gave an excellent analogy. "The Speaker of the House is the father, and the floor leader is the mother. The father sets the course and the mother says 'you're going to eat these greens.' And it's the same in the Senate. The Pro Tem of the Senate is kind of the dad and the floor leader is kind of the mom. And I don't really like our floor leader." He said "It's like Dad kicked Mom out, and now we've got a step-mom."

"It's an interesting dynamic in the Senate. It's been tough," he added. A lot of bills have been dying because of personalities. "The Pro Tem got up one day in caucus and said, 'Look, we need to be voting on policies, not personalities. We know that we don't all get along, but it needs to be on policy.'"

He said they've had chairmen that were mad and wouldn't hear any of their bills. "Just wipe them off of the agenda." Murdock said one day he had enough of it and "a little western Oklahoma came out in me. They were holding up one of my bills."

Earlier in the week things were going smoothly and then it just "blew up." He said, "You never know what little thing may happen that blows up the whole thing. But I think we're getting it back on course."

He said there are Wall Street bankers that won't loan money to gun manufacturers if they make plastic magazines or gun stores if they sell long rifles to anyone under 21. "I've got a bill that says if a bank discriminates against a gun manufacturer or anyone that sells guns strictly because of what they're doing, they do not qualify for state contracts. That's my favorite bill," Murdock said.

The bankers association came in and wanted him to shelve the bill and not push it. He explained that no Oklahoma banks are doing this. He said these big banks are pushing their gun policies in the state of Oklahoma.

"If you pull back and look at what is going on, it is the anti-gun crowd. It is the 'we need more gun control' crowd that is pushing this," he said.

In his office, Murdock has a picture of cows that takes up one wall. He called this to the attention of the bankers explaining, "This is all policy and what the 'woke' crowd wants to go after. What happens if they decide that AOC (Rep. Alexandra Ocasio-Cortez) is right and 'we're going to go after these cows because they fart?' And what happens if banks decide they're not going to loan money to farmers because of the methane gas cows are putting out?

"Now that sounds crazy right now, but 20 years ago what we're going through right now I guarantee you we would have said, 'That's crazy. That will never happen.' That's why I'm pushing this bill so hard. It goes back to the Golden Rule. The man that has the gold makes the rules."

He said there's a bill just like his gun bill that says the same thing about the oil and gas industry "because you have companies that will not loan money to oil and gas because their ESG (environmental, social and governance) score is not high enough. It is an attack against fossil fuels.

"Why would the state of Oklahoma take your tax dollars and put them with companies that are attacking where you make your money at?"

The legislators answered some questions from the audience before the program ended. A video of the meeting may be viewed at http://www.AlvaReviewCourier.com.