'We pray and we go to work' 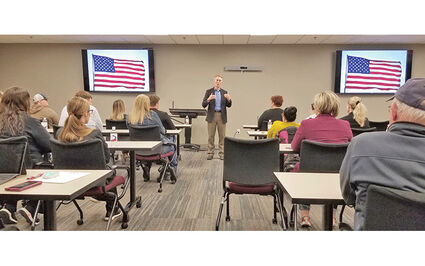 US Senator James Lankford speaks at the Northwest Technology Center Thursday morning. A large crowd filled the multipurpose room to hear from the senator and ask questions.

"America has its back against the wall," said John Failes, chairman of the Woods County Republicans. He was addressing the crowd waiting for U.S. Senator James Lankford at Northwest Technology Center in Alva Thursday, April 14. Failes concluded, "America is falling apart and we are the target.

"We have a shining star and a good Christian man representing us in the Senate who is here today to discuss the situation, how he is going to help fix it and represent Oklahoma best in his next term."

The crowd applauded and rose to their feet as Senator Lankford walked to the front of the room. He introduced "my bride Cindy," saying they will have been married 30 years in three more weeks. He explained his wife is a speech-language pathologist who has clients so she generally stays home while he travels back and forth to Washington, D.C.

Regarding the issues mentioned by Failes in his introduction, Lankford reminded everyone that "none of the issues he said are bigger than God.

"I have the philosophy that comes from Nehemiah Chapter 1; we pray and we go to work. Let's pray and go to work and let's see what God does."

Lankford talked most about the country's southern border. "We have never had as many people crossing our southern borders illegally as we've had in the past year ... ever. To give you a point of reference, there have been more people illegally cross our border in the last 14 months than all four years combined of the Trump administration. They have opened up our southern border."

He said over two million people have crossed the border illegally in the last year. In the last six months people from 157 countries have crossed.

"Because the border is so open and the whole world knows it, we now have more people crossing from outside Latin America than we have from Latin America. So literally the whole world knows you can get into the United States by paying the cartels to be able to get across the border on the southern side and to be able to get into the country. That's the route to get in. We have got to put a stop to this!" he said.

"The challenge that we have, in the Congressional side, is in our Constitution the Congress writes the law, the President executes the law and the courts actually oversee the law is actually interpreted correctly. ... I don't get to go down to the border and start arresting people. That's actually the president's job. So what do you do in a case when the president will not execute the law or refuses to partially execute the law?"

Lankford described what he's doing about the border situation, "One is to shine a spotlight on it. Going all the way back to last year, the Biden administration wouldn't allow members of the press to get down to the southern border, and the members of the press dutifully said, 'OK, fine. We won't go look.' It's bizarre to me that a free press would just let it all slide.

"There's a group of us, myself included, that went down to the southern border, and I did the crazy thing of taking my cellphone in to some of these places. And when I got in, I turned my cellphone camera on and started broadcasting live what I was seeing. If the press is not allowed to go in, I can go in as a U.S. Senator. I got in and I started broadcasting it. We put the first pictures out last year of what was actually happening at the southern border. As a result of that, within a week the press was asking to be able to go down. They started actually engaging at the time. And if you'll remember from about March to June of last year, the press was at the border all the time."

Even though media attention is now focused elsewhere, Lankford said "the issue at the border is still the same. So I go down to the border often to be able to help demonstrate back to Oklahomans what's actually happening at the border. I also stay very engaged in the border patrol staff and their leadership. I was told that the Border Patrol council actually endorsed me for this race in the Senate again, saying that's the guy that we want to have engaging on our issues. Because I stay engaged with them and can track it."

Drones at the Border

"Let me give you a for instance on that. There is at our border right now a set of counter UAS (unmanned aerial systems or drones). You'll hear the term CUAS that are up there. These trucks will actually engage with high level unmanned aerial systems that the cartels own. To give you a perspective, in just the first two months of this year the cartels came over our border 10,000 times with the drones.

"They're delivering drugs. Where in the past they would just send a person over, now they can load drugs up on a drone, fly a drone over, land in the United States and somebody will pick it up there. And then they'll fly (the drone) back over. Or they'll take their drone over and they'll actually park it over the border. They'll watch where the border patrol is and see where they are not, and they'll move people across the border illegally."

"They're putting people in a family unit. They're not worried about those folks because Biden is just going to release them into the country," said Lankford. "So they'll take family units and send them one direction. The border patrol will all have to come in to take care of processing those individuals. Once they've got their drone up and can see the border patrol has moved to that grid then they'll put criminal aliens across another part of the river in order to get them in. It's a slick operation.

The border patrol will tell you the border is secure. It's just secure on the south side.

"So when they keep talking about this illegal immigration is no big deal, oh it is a big deal. It's facilitating lots of human trafficking into our country. It's feeding the cartels $10 billion in actually moving people into our country."

Lankford said the government has methods to combat the drones. "We have a counter UAS system on the ground in that area that the secretary of DHS (Department of Homeland Security) has never allowed to be turned on. I discovered that last time when I was down talking to the border patrol. They said we have the ability to take these drones out that are delivering drugs. 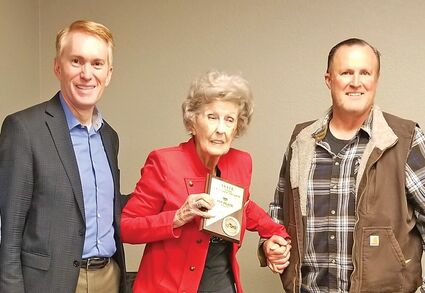 "So I went back in, met with the secretary of DHS who told me, 'No, FAA (Federal Aviation Administration) hasn't signed off on it.' So I go to FAA and get with them to find out they've actually processed everything and they've sent it over to DHS. So I go back over to DHS, and I've now met with him three times. And we're going to continue to be able to press until they put that counter UAS system in place that's actually there. I'm the only office working on this issue because I actually tracked it, found that it was a problem and I'm going to keep pushing on this until we actually get that done."

Sen. Lankford had more to say about the issues at the southern border as well as other topics. A video of his entire speech as well as the question and answer period following may be seen at http://www.AlvaReviewCourier.com.

In closing, Lankford asked everyone to remember to vote in the June 28 primary. He said some candidates regard an election as mortal combat, but he considers it to be a job interview.