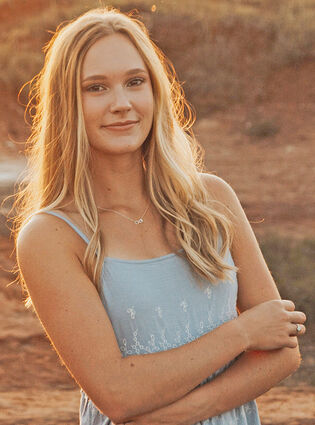 Clare Pollock is the voice of the daily announcements and Pledge of Allegiance for the 53 students who attend South Barber High School in Kiowa, a tiny town that hugs the Oklahoma border in south central Kansas.

One of 15 Chieftain seniors, Pollock holds or once held numerous other titles, as well. She's the student council president, a class officer, head cheerleader, tennis player, a musical soloist. And, when commencement day arrives May 8, Pollock will be South Barber's valedictorian for the Class of 2022.

"I've always thought of myself as a leader," said Pollock, the Capitol Federal True Blue® Student of the Week. "We have such a small school that I feel like I can really apply that. I've always wanted to be involved in whatever I can."

The younger daughter of Mark and Krista Pollock, Clare has viewed extracurricular opportunities as a way to better herself. To those who have witnessed her dedication as a student carrying a 3.99 grade-point average, she has set a standard for others to emulate.

"She definitely leads by example," South Barber principal Brent Shaffer said. "When other students see a student who puts that much into their schoolwork and that level of caring, that helps push them toward the same thing."

Pollock played four seasons of tennis for South Barber, where she was coached by her mother, Krista.

She plans to attend Fort Hays State in the fall to study nursing. Her interest in the vocation was sparked by a family friend's delivery of a premature baby, and the ensuing care the child received in a

"Learning about that kind of sparked something in me," said Pollock, who has received a nurse aide certification through Pratt Community College and is currently pursuing certified medical assistant status. "The mother talked about how the nurses made an impact on her. I did some research into nursing – specifically that type – and I just have a lot of the traits and characteristics for it."

After working at a local pizza place and at Kiowa's city pool throughout high school, Pollock is looking for a summer employment opportunity in the nursing field. She bypassed her final track season to focus on job and scholarship applications. At graduation, the girl who grew up performing at Kiowa United Methodist Church will sing with some of her classmates during the ceremony.

"I've got to do all the activities I wanted, and that's what's great about a small school," Pollock said. "Some have helped me gain experience for future things, some have helped make myself more confident."