Taking on a 'dream job' in a time of tension 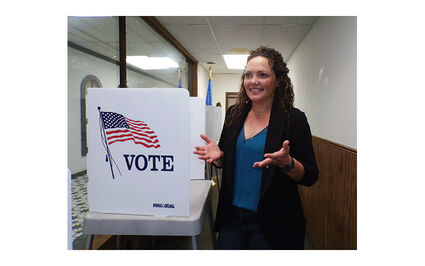 Holly Blevins is the new Woods County Election Board Secretary.

Holly Blevins, recently appointed Woods County Election Board secretary, said she is "thrilled" to find herself in a job so tailored to her interests and education – a job that is deeply meaningful and critically important to all of us, especially in these crazy political times.

She said this job feels like where she has always wanted to be. She's not planning on leaving any time soon.

Originally, Blevin's plan had been to be a teacher, to teach history, but as her education moved along she realized she really didn't want to teach. She wanted to focus more on history and politics, which had both been lifelong fascinations.

"I'd gotten word that there was an opening here (at the Woods County Election Board), and after I did my research I thought this would be the perfect job for me."

Election board secretaries aren't elected; they are appointed by the senator representing the county. In Blevin's case, she was nominated by Senator Casey Murdock. The Oklahoma State Election Board then reviewed her nomination and approved the appointment.

"I have always had an interest in politics, law and the statute," Blevins said. "Being able to be a part of the election process, upholding the integrity and security of it, was something I wanted to be part of. After receiving the appointment, I was grateful and thrilled to get started."

Blevins hasn't been in the position long, but she has made it through her first election with flying colors and is excited to manage the process in statewide and national elections.

What Does a County Election Board Secretary Do?

"A lot of people think I answer the phone all day," laughed Blevins.

And, while surely she does spend a fair amount of time on the phone, her list of duties is impressive and goes far beyond the lay understanding of the word "secretary."

Some of it might seem a little like what many secretaries do: she maintains registration records; she prints, tests and distributes election ballots; she receives candidacy declarations for county, municipal and school elections. But that's just the tip of the iceberg of her responsibilities.

Blevin's job began with a lot of training.

"I am trained by the state board in all the voting procedures, in how to keep a good chain of custody, how to use the eScans, which are operated using multifactor authentication." She was trained in how to program the eScans, and learned that everyone who interacts with the machines has a specific code that they input into the eScan to be able to activate and use them. The codes may also help document the chain of command. She is responsible for programming, testing, and maintaining the voting devices called eScans. "The eScans are never connected to the internet," Blevins said, and they are most definitely not Dominion voting machines.

Blevins is also responsible for locating, surveying and designating polling places, although she walked into "a great set-up here," she said, praising the work done by her predecessor and the team that was already in place when she arrived. Her staff have been tremendous, she said.

"There are six precincts in Woods County," she said, "three in Alva, and one each in Freedom, Waynoka and Dacoma." Each precinct requires three precinct officials – "a Republican, a Democrat, and the third can be an Independent or something else," she said.

"I'm trained to train (precinct officials)," Blevins said, "and then we have a big training in June before the big election. Anybody can be a precinct official, so long as they are a registered voter. To volunteer, contact the election board.

How Is Fraud Prevented in Local Elections?

The State of Oklahoma has a uniform election system, which means Oklahoma voters cast their ballot the same way in every county – following the same procedures, adhering to the same security protocols, and using the same type of voting device.

"In Oklahoma we use paper ballots that are hand-marked by voters and counted by the eScan A/T – an accurate, reliable precinct-based optical scan tabulator – in all 77 counties. Paper ballots are read, counted and deposited into a secure voting bin when the voter inserts a ballot into the machine.

Voting at nursing homes is conducted in a different place – the nursing home – but other than that, the procedures are the same. When an absentee voting board visits a nursing home to deliver absentee ballots requested by residents there, one member of the voting board is a Republican and one is a Democrat.

Standardized training ensures that precinct officials and bipartisan county election board members have been given the knowledge and resources to properly conduct the election in accordance with the law.

"This built-in bipartisan oversight of the election process helps protect the integrity of our elections by ensuring both major political parties are represented at every level."

The voting devices are never connected to the internet; and the devices and components are protected by a detailed security plan that includes multi-factor authentication and anti-tampering verification.

Both ballots and devices are secured through a strict chain of custody that is maintained through the certification of the election.

Ballots are read by the voting device's optical scanning mechanism and recorded, then transferred to a mobile ballot box, or MBB, similar to a flash drive. A paper tally is also printed and used to verify the results on the MBB.

After the elections, the eScans are brought back to the county election office, I read and verify the results, and then send it through a virtual private network to the state, and that's how they get the tally. And then the sheriff comes and he secures the ballots, the MBBs – everything, and it is kept secure there until the election is certified or a contest is filed. So there's a nice chain of command where it's always secure and being protected.

Woods County elections have generally been characterized by virtually no attempts at fraud, voter intimidation, or voter suppression. However, in these times of heightened political tensions, some out-of-the-area groups have been seen engaging in attempts to change people's party or vote by methods designed to intimidate or manipulate. Blevins has not seen any of that here. However, it's always wise to prepare for such an eventuality.

Blevins has already thought it through. Fortunately, she's not on her own.

For example, fraud and voter suppression are serious crimes that carry strict punishments for those found guilty, Blevins said.

Further protective measures include the state's requirement that voters show proof of identity, whether voting in person or by absentee ballot, Blevins said. Voters must request and return their own absentee ballots. Ballots must be notarized unless the voter is physically incapacitated, in which case the voter's signature must be witnessed by two people.

And any candidate with questions about the count may request a recount by filing a petition and posting a deposit.

But Blevins believes that ensuring equal representation is the most important way we keep our elections secure.

One of the most effective security features of Oklahoma's voting system is the requirement for bipartisanship contained in state law, said Blevins, "from the membership of the state election board and each county election board, to the partisan make-up of precinct officials and nursing home absentee voting boards.

"By law, Oklahoma's two largest political parties provide a list of registered voters to serve at every level of election administration. Therefore, when you vote on Election Day at your local polling place, at least one of the three precinct officials is a Democrat and one is a Republican." Registered independents and members of other recognized parties are also eligible to be appointed as precinct officials.

"Paul Ziriax, who is the State Election Board Secretary, all of the election officials at the state level, each secretary of all 77 counties, their assistants and employees, the county election board members and on to the precinct officials – all of these people are working together to provide the state of Oklahoma with a free, fair and secure election," said Blevins.

"In Woods County, these are not random people administering our elections – these are our friends, family and neighbors.

"I am honored to serve as the Woods County Election Board secretary and I take pride in the integrity and dedication of our Oklahoma election officials."