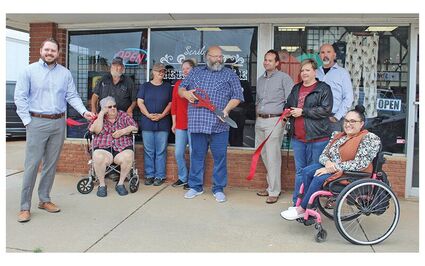 It started off as a joke, Justin Scribner said.

"I was having a hard time finding clothes, and joking around that I should start my own clothes store," he said. "It was nothing more serious than a joke" until, well, his other company, Triple J Trucking, needed to move the UPS and FedEx stuff out of its office. And trucking is a volatile occupation right now, economically speaking.

"And, well, other than Walmart or Atwoods, we didn't have anyone who even carried men's clothing around here, and they don't carry much for big and tall men."

So Scribner opened Scribner's Mercantile, at the corner of Flynn and Seventh Street. It carries men's clothes, especially including clothes for big and tall men, men's hygiene products from Dr. Squatch – a line that has proven extremely popular in the one month that the Mercantile has been open.

Scribner described the clothing he has for sale as "basic clothing; not anything abnormal for Alva. T-shirts and jeans, and so forth. The brand of jeans is Grand River, and I love wearing them. They're a really comfortable pair of jeans. We've got some other lines we're working on getting in but haven't got them in yet."

"We've got other stuff besides," he said, "metal signs, gifts." The store will ship anyone's UPS or FedEx packages at no extra charge. "We also print labels, so if you need to ship a gift and don't have a label, we can help you from start to finish, to getting it out the door for you."

As for himself, expect to find Scribner at the Mercantile more often than at Triple J Trucking, at least for the near future. Scribner, who is 48, said "being 48 in the trucking world is like being 95 anywhere else," and laughed. That constant go, go, go, 24 hours a day, 7 days a week – it takes an enormous toll on a person's physical and mental health both, not that opening the Mercantile means Scribner has lost his mind. It's just time for a little bit more peaceful approach to life, perhaps.

"I'll be spending most of my time in the Mercantile to get it up and running and see how it goes," Scribner said, "and honestly I got one truck broken down in the shop" and it just all seems to be moving in the direction of the Mercantile.

"So, the majority of my time will be spent down here for a while, and once we get it going good, we'll put someone in here" to manage the store. And this initial phase may take some time, due to problems getting inventory in, which is due to supply chain problems beyond the control of even a trucker.

In fact, the supply chain issues have been by far the most difficult part of the effort. Funding was not really the issue; his existing company made it possible to get the funding for the store – something that hadn't been possible when he started his first business. So that's been easier.

However, the supply chain sounds like a never-ending headache.

"I'm gonna say we're stuck with supply chain issues for another couple years," he hazarded, "but I really don't know, even being in transportation all these years. I can tell you the markets aren't as good as they used to be, and that it doesn't look as though there's as much stuff being shipped around right now."

An Eye to Being Useful

In the month the Mercantile has been open, he said "we've had a pretty good response, even among women. I've had quite a lot of people come out. We're still getting a lot of our inventory in due to supply issues," he noted, sounding a touch frustrated. But his good humor never seems far from the surface. He really just wants to be useful.

He recounts a story of finding a package on his doorstep – medication that had been mailed to him – and someone had torn open the package and pulled out the bottles of pills. "When they saw they weren't anything they wanted, they just dropped them," Scribner said, but he's concerned about other people who have medication delivered. "One thing I've been telling my older customers, if you have medications coming to your house and you're worried someone will steal the package off your porch, have it shipped to the Mercantile. I won't charge you for having them shipped here, and you can come get them when you want them, knowing they're safe." 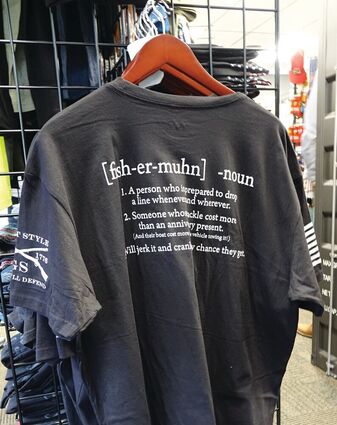 Casual t-shirts and jeans are a staple product at Scribner Mercantile in Alva.

He's also working on a virtual mailbox solution for truckers. Truckers can have their mail shipped to the Mercantile, where it's photographed and the images emailed to the trucker. The trucker is then able to monitor his mail from afar, and if something comes in that the trucker needs to see the contents of immediately, the service will open the mail and send images to the trucker.

It would be a hugely useful service for truckers or others who are always on the road. Scribner said he wishes he'd had this service himself 15 years ago.

As Scribner continues on this new adventure, he plans to keep his eyes peeled for other unmet needs he might be able to do something about.

Scribner'll take care of you.