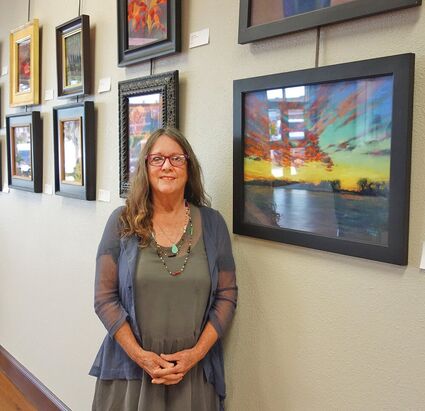 Jude Tolar of Stillwater is a retired graphic artist who is now concentrating on her plein air watercolors. Her work is on display during May at Graceful Arts Gallery in Alva.

"I think as soon as I could hold a pencil, I began drawing," says Jude Tolar. The Stillwater artist has always managed to include art in her life, one way or another.

Tolar, whose first name is pronounced Judy with a long "e," grew up in southeastern Kansas and then in Bartlesville. She took art classes in junior high school. That's where she learned about graphic design and lettering. "That was a very exciting avenue in art that I didn't know anything about," she said. In high school, she continued to take classes in art although she had to juggle them with an afternoon and evening job.

When it was time for college, Tolar took a practical approach. "I wanted to do something in art, but I thought the only options were either really being a starving artist or being an art teacher. I didn't think I was particularly qualified for either one of those things," she said. Instead she focused on interior design. She quickly learned she was not a three-dimensional artist.

Her college path at Oklahoma State University was diverted into a bachelor's degree in psychology. "Thinking is a big part of art so it kind of went hand-in-hand," was her reasoning. She continued to do her own art and took some community art classes. Later she had a chance to do some graphic design, which she had discovered in junior high.

"That led to my whole adult career as a graphic design artist and illustrator," she said. Her first job was with a library system in Oklahoma City as a staff artist where they had an in-house print shop. "I was the artist who designed all of our bookmarks, brochures, posters, annual reports, everything," she said. "It was a great learning experience, and I had a lot of fun."

Tolar went back to school, this time at the University of Oklahoma in Norman, where she took two years of fine art classes doing drawing, painting, life drawing and illustration. "I've been doing freelance art and graphic design ever since," she said. After moving to Stillwater, she continued her freelance design work for a number of companies until she retired.

On her own time, Tolar continued to draw and paint "because it was just so much fun." She also wrote and illustrated some children's books.

After retirement, she realized she would be more likely to draw on a regular basis if she operated on a schedule. She gathered some friends who had flexible time to come to her house on Tuesday mornings. They would draw from life, one of her favorite ways to work. "We'd hire college students or wrangle our children or our spouses or whoever else we could get to pose for us," she said.

Then Tolar learned about plein air, painting outdoors in the fresh air. "We tried that one beautiful spring morning, and I kept thinking, 'I need to work in color. What do I have?'" she said. There were some pastels left over from an art classes at OU she thought might work well.

"We had our azaleas and dogwoods that were blooming at the time, and that was it," Tolar said. "I fell in love with that way to paint.

"Since that time 16 years ago, I started studying with some of the best pastel artists. I've had workshops with many who are very well known. My mentor and good friend is Clive Tyler who is a fabulous American impressionist pastel artist in Taos. He taught me many, many things."

Tolar now teaches workshops and gives demonstrations herself. She said her experiences have opened up "a whole new world of excellence in pastels."

Having always loved flowers, gardening and being outdoors, Tolar says flowers are a favorite subject. She compares plein air painting to camping. "If you don't mind getting a little dirt on you or getting sweaty or chasing a fly or two, you'll have a lot of fun with plein air painting. You're out with the best light there is – sunlight."

In addition to flowers, Tolar does landscapes. She likes painting trees because each tree has its own character. "There's always something to paint, more things than there are hours in the day," she says.

As her style developed, Tolar was encouraged to enter her work in some contests. She is now a signature member of the Pastel Society of America. She is in the master circle for the International Association of Pastel Societies.

"Being with those other artists who are so talented and setting my sights on pushing myself to create the most beautiful things I can just led me places I've never expected to be," she said. "I thought I would be in my jammies, retired by now. Instead I paint a lot and show here and there. I've taught workshops in various states. I love teaching and passing on the things that have been passed on to me."

Tolar is one of the featured artists during May at Graceful Arts Gallery in Alva. People are invited to stop by 523 Barnes Street to view her work and that of other artists in the Sun, Fun and Friends exhibit. Her display ranges from soft pastel landscapes to brilliant bold flowers.

"There's so much beauty out there every day," Tolar says. "I just try to capture a little piece of it on paper."