Jackson to celebrate 100th birthday May 29 at ARC 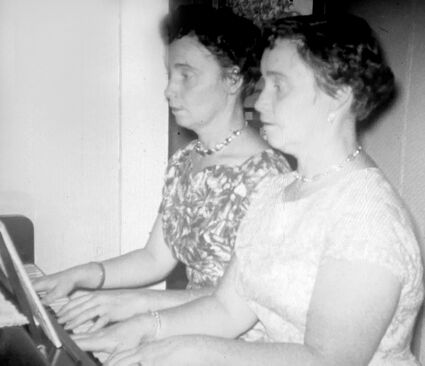 Reta and Neta both loved playing duets on the piano together.

On May 19, 1922, twins were born to George and Nellie Gray, 2 miles northwest of Capron next to the Driftwood Creek. They named the twins Orieta Viola and Oneta Olga.

They grew up with four other siblings: Orlan (the oldest), Oneal, Olen and Nellie (the youngest). They all graduated from Capron High School and attended the United Methodist Church in Capron, and were very involved in all the activities that went on around the church and community.

As kids, Orieta, Oneta and the others all did their part with chores and everything else that went with living on a farm.

In 1939, the family took a vacation to Colorado to get away and see relatives. While there they were notified that their home had burnt down. They then moved 1 mile north and three-fourths of a mile east where they farmed for their friends, the Wilsons, who had moved to Wichita, Kansas.

In 1941, the twins, now being called Reta and Neta, graduated and went forward with their lives. Neta married Melvin Kimbrel, and Reta went into nurses training at St. Francis in Wichita, Kansas. After graduating she came back and started working at the Alva Hospital.

In 1946, after World War II, Reta married Ernest Jackson, who had returned from the war and was farming for Frank McArthur in the Capron area. She and Ernest lived 3 miles east and one-fourth of a mile north in a little house that Frank owned. Reta quit working to start a family. Duane, the first, was born in March 1951 and the second, Harold, born in October of 1952. The little house wasn't big enough so they bought a house in Capron. They lived there for four years, sold the house and moved 3 miles east and 1 and three-fourths miles south.

In 1955, Reta had to go back to work after a crop failure. This time she went to work at the Achenbach Hospital in Hardtner, Kansas. She worked there for five years, then went to Kiowa, Kansas, until she retired in 1990 to take care of Ernest, who had Alzheimer's.

After retirement, she and Ernest enjoyed traveling to different places, sightseeing and visiting relatives and friends and going to see grandkids in all their activities.

Reta and Neta joined the National Twins Association, and Reta and Ernest and Neta and Melvin would go to the National Twins Convention held every year in different states. When Melvin passed away in 1994 and Ernest in 1995, the twins kept on going. Every year Reta and Neta took a trip. They traveled all over the U.S. and kept records of their travels. They started writing of their trips and publishing articles in the Hardtner paper. They were known as the Traveling Twins. They both loved playing keyboards, Reta on the piano and Neta on the organ, and always played duets together, even in church. They played in church every Sunday if Ann Fox couldn't do it. Reta's favorite warm-up song was "Wildwood Flower." She still plays the piano that she bought 60 years ago, and it is now with her at the Share Convalescent Home.

In March 2009 the duets came to a halt with heartbreak when Neta passed away from problems with heart surgery. Reta slowed down but didn't stop. She still kept busy. She enjoyed her family. She went to all five of her grandkids ballgames, programs and activities. She watched them grow up, start their own families, and have kids of their own, her great grandkids. She was happy when she finally got a girl born in the family. She also received twins as great grandsons. 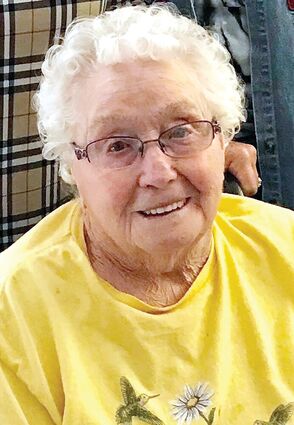 In 2012, Reta entered Share Convalescent Home and made it her home. She found out she loves Bingo. If she was doing something or visiting someone and Bingo started, she said she had to go and "we'll do this later."

Harold, her youngest son, passed away in December 2014. Denise, his wife, lives in Yukon. Duane and Sherrill live in Colorado. Kyle, her oldest grandson, is stationed in Colorado Springs. Michael, Trent, Evan and Brett are spread out in Oklahoma.

The kids, grandkids, great grandkids, brothers and sisters, nieces and nephews say "All that know you, love you. Happy 100th birthday, Mom."

A 100th birthday celebration will be held on Sunday, May 29, at the Alva Recreation Complex, 1887 Goldbug Blvd, Alva, from 2 to 4 p.m. Please come join us in this celebration for Reta Jackson.