Honoring and remembering those who gave their lives 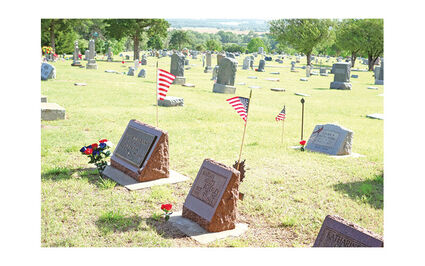 Flags mark the graves of those who have served in the US military. The flags were placed by American Legion and Scout members along with other volunteers at the Alva Municipal Cemetery.

Memorial Day begins early in Alva with a Saturday morning breakfast followed by the placing of flags on veterans' graves. American Legion members, Scouts and other volunteers gather to distribute the flags.

Thelma Crouch, representing the DAR, has volunteered for this duty several years. She said she covers the same segment of the cemetery and is finding it easier to locate veterans' burial spots. Some of veterans were awarded purple hearts and one in her area is a missing in action veteran.

The American Legion also is responsible for the flags lining the downtown streets in Alva. They mark various patriotic occasions throughout the year.

On Memorial Day itself, people arrive by vehicle and by foot to join in remembering veterans no longer with us who have served their country. Gathering in the Flagpole Plaza at the Alva Municipal Cemetery, people sit in folding chairs or stand among the surrounding trees. Brisk wind, leftover from a stormy night, mitigates the sunny morning temperature in the 70s.

Lenny Reed, chairman of the Cemetery Board, opens the program, introducing Mayor Kelly Parker who words a prayer. A gun salute punctuates the air, presented by the American Legion Post 92 honor guard. 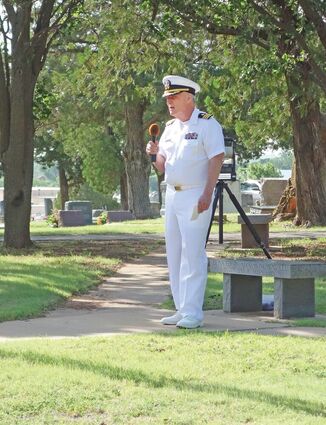 In his Navy dress whites, Commander Philip Self, MD speaks to those attending the Memorial Day cememony at the Alva Municipal Cemetery.

The color guard of Scouts BSA Troop 392 marches smartly to the flagpole centering the plaza. Carefully they unfurl the U.S. flag and the Prisoner of War flag, attaching them to ropes and lifting them to half-staff. A lone Scout, Keegan Logsdon, plays the haunting sound of Taps on his bugle.

Reed introduces Commander Philip Self, M.D. of Alva who steps forward in his Navy dress whites to address the crowd. Self explains some of the history and meaning of Memorial Day. "We cannot forget those who gave their last full measure of devotion," he says over the noise of the wind.

The program concludes with Arden Chaffee thanking those who helped with the ceremony. He issues an invitation to move to the cemetery pavilion where he and his wife Nicki have provided refreshments to enjoy. Guests linger to enjoy the donuts and conversation while others visit the graves of family members and friends.