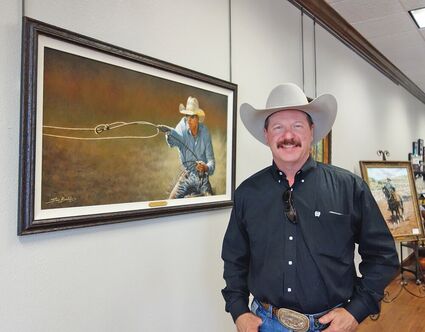 Looking at his surroundings and drawing with a pencil, the young boy didn't realize how far his artistic talent would take him. Steve Boaldin grew up on his family's 3 Point Ranch in Elkhart, Kansas. He remembers beginning to draw when he was in the second or third grade. "I was just inspired to do that. It was in my blood," he said. "I saw detail in everything around me, and it just drew me in."

Boaldin's grandmother noticed. "She took lessons, and she lived in Amarillo, Texas. She noticed that I had that kind of desire in me," he said. "She began to find me some books of horses and things like that. Of course, it just went right along with what I loved anyway."

He saw horses every day so it was just natural that they were one of his favorite subjects. "I could see them in the book and see how it was constructed," he said. "They were Walter Foster books. Probably most people are familiar with those in the past. He could draw really well. He did all kinds – horses, people, dogs, cats, everything. But my focus was horses."

Of course, art was not the only activity in his life. Boaldin started participating in rodeos at the age of eight and continued until he was 20. He later worked in stockyards, feedlots, "everything cowboy."

"All of that was inspiration to me, to my art," he said. "I just went to my roots, kept to my roots. The reason I paint what I paint is because that's what I know."

Unlike many artists who are fascinated by the old west, Boaldin is inspired by modern day cowboys, contemporary cowboys.

When he was 18, some people told him about a traveling art teacher who taught in ten different towns in the panhandle areas of Texas, Oklahoma and Kansas. "I was so glad I ran onto him, because I didn't know how to paint color at all," Boaldin said. "He helped me to get a start. He took me under his wing. He was in his seventies, and I was 18."

Boaldin said his new teacher didn't think he'd stick with it, but he did. He studied with him for five years. "He started selling my paintings after my third one under him," he said. That inspired him to become an artist.

When he was 26, Boaldin moved to Oklahoma City to attend technical school for commercial art. He thought it might help him to be a professional artist as well as working on his fine art ability. That led to a career of more than 30 years.

Then in 2016, Boaldin was laid off from his job as an illustrator for a newspaper. All those years, he was continuing to work on his art on the side "because that's where I wanted to go. That's where I wanted to be. That was the ultimate goal in everything I did," he said. "I just kept working at it, day and night."

With no day job, Boaldin didn't know what he was going to do. "Here it is getting close to the end of my career age anyway," he said. But within a month, he had a one-man show in an Edmond gallery. A publicist, Saraa Kami, came by the show and talked with Boaldin's wife. Kami was from California and just passing through on her way to somewhere else. She was only there for two days.

Kami gave Boaldin's wife her card and said he should call if there was anything he would like to do. "That night my wife gave me her card, and I decided I better call her," he said. They met the next day at Starbucks.

"It was interesting how all that came about because she asked what I wanted to do," Boaldin said. He learned about her work, and they talked. "We both figured out what we wanted to do. What I wanted was to go to ranches across America, take photos and have photos to produce real, fresh art. Not just the same cowboys but from every ranch, something different," he said. "She loved that idea. She said, 'Steve, that's a TV show.' And I thought, 'What?'"

Kami said she thought PBS would be interested. She told him they needed a camera crew, a sponsor and a place to shoot. "I knew where I could shoot my first episode was at my family's ranch, and she knew a camera crew," he said. "The same day, I found a sponsor who believed in the idea. That same day, everything happened."

In five days, they were shooting their first film for Art of the Cowboy. They put together a trailer, presented it to PBS, and "they took it right away and said when can you have your first show to us?"

"It was just a chain of events that evidently was meant to be," Boaldin said. That was six years ago, and within two years the show was airing in 50 states. "It's just been a blessing," he said.

Reflecting on the progression from his early drawing and his teacher at age 18, Boaldin said, "So that inspired me to become an artist and eventually a commercial artist, graphic artist and become more of an illustrator toward the last 12 years of my career. And then all that experience boomed me into the Art of the Cowboy series."

During June, Graceful Arts Gallery in Alva is displaying Boaldin's beautifully detailed paintings of modern day cowboys. You can see more of his work and learn more about him at http://www.artofacowboy.com.

You may also view a video of Boaldin at http://www.alvareviewcourier.com.