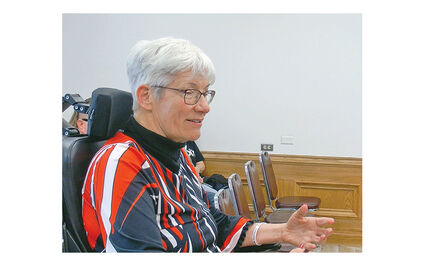 Elda Jones who lives at the Homestead in Alva asks the city council for information on restoring the fountain at that facility. Photo by Marione Martin

Elda Jones of Alva is concerned about the fate of the Homestead pond project. Jones attended the Alva City Council meeting Tuesday night to ask about plans for the pond and fountain. Accompanied by Homestead residents Elaine Schnebel and Betsy Miller, Jones told how much she enjoyed the fountain before she moved away in 2007. Now that she's returned and living at the retirement facility, Jones said, "I think we need the fountain back. It was a drawing card for me."

Jones said residents at the Homestead have differing opinions about what is happening with the fountain. Some think the pond will be filled in while others expect it to be restored.

Jones was on the schedule to speak. However, no one had comments during the open public remarks section of the agenda.

Mayor Parker gave a report on city business. The new sanitation truck was delivered last week. Parker didn't know if it was in service yet but it will be soon. "That crew is real excited to have that here in town," he said of the sanitation department.

As of Tuesday night's meeting, the concrete paving project on 4th Street in front of City Hall was finished except for completion of striping. Parker said the street should be open by the end of the week.

The city office is currently working on a payroll transition to Paychex. "Essentially this is going to eliminate a long term commitment to a payroll company, and it's going to have a roughly $40,000 positive impact on our budget, meaning it will cost us less," said Parker. Later in the meeting, the city council approved a resolution adopting the new agreement.

The city has been working with a company from Enid to have some property surveyed for upcoming projects. Parker said these include the swimming pool, an industrial project near Wheeler Brothers, and industrial projects at the airport. He said most of the surveys have been completed.

While the city is searching for a new city business manager, a company has been hired for financial management. The mayor said the transition has gone smoothly, and the Crawford and Associates staff has been very responsive to phone calls from him and city staff.

The annual payment has been made to the airport. After the city borrowed federal funds earmarked for airport projects to make up deficits elsewhere in the budget, they made an agreement with the Federal Aviation Administration (FAA) to pay back the funds with interest. The city is obligated to pay $116,000 per year. However, five percent of sales tax collects has been saved for this purpose. This year, the city paid back $250,000 which Parker said is roughly "halfway there in two years."

He said the payback progress is of concern to the FAA and the Oklahoma Aeronautics Commission (OAC) in considering future grant opportunities. In a recent meeting with OAC and FAA representatives, he learned of more grant opportunities. He was also made aware the Alva Regional Airport is "going to be eligible for an extra $159,000 per year for the next four years for airport projects as well."

Earlier this month, Parker had a meeting with NODA (Northern Oklahoma Development Authority) in Enid regarding the water resources board. He said there are two funds that have loan forgiveness programs. One is for clean water and one is for drinking water. Several hundred thousand dollars could be available if Alva has an application accepted. Parker said he'd be getting together with the council's water-wastewater committee to talk about some of those options.

The city received notice from the federal government that the next round of ARPA funding will be here in September. It will be around $430,000. Parker said the city will have to account for how the money is spent and an audit will be done. The city is going to use the money for payroll which will make accounting fairly simple. That will free up money in the budget to use for other purposes.

The city is moving forward with the new iWorx software training. Parker is hopeful that project will be underway in July.

He said they are looking at another accountability program for the city office. Their needs don't fit in the scope of iWorx. No decision has been made, but Parker said he'd keep the council updated. The cost is low enough it would not require council approval.

About a week ago, the Northern Oklahoma Regional Transportation Planning Organization (NORTPO) was in Alva for a public hearing. About eight people attended. They explained some of the planning opportunities they are working on for northwest Oklahoma. Parker said these could be roadways, railroads, airparks or other transportation. "Members of our community weighed in on what they thought should be included in long term plans for transportation," he said. By participating in this plan, Alva is eligible for some grant funding. Parker said Alva's applications for grants may be scored higher because the city is involved in the planning.

Connor Martin gave a brief report from the Finance Committee meeting held prior to city council. He said the committee spent quite a bit of time with Crawford and Associates getting familiar with the format for financial reports.

Sales and use tax collections for May were $387,000, up six percent from May 2021 and up 15.5 percent over April of this year. So far, 90 percent of budgeted revenue from sales and use tax has been collected.

A video of the entire meeting may be viewed at http://www.AlvaReviewCourier.com.