Still no city manager for Alva 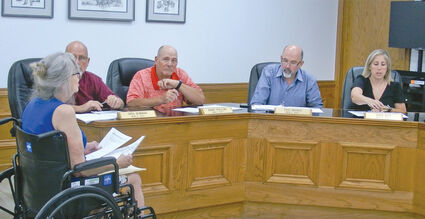 Gail Thomas from OEDA (at left) explains additional resolutions to be passed so Alva can receive her services in capital improvement planning. A Department of Commerce grant will pay for her work. Councilmembers pictured, from left, are Greg Bowman, Randy Stelling, Troy Brooks and Sadie Bier.

With a lot on the agenda, including an executive session, the Alva City Council meeting took about two hours Monday night, June 20. Daniel Winters was the only councilmember who was absent. Mayor Kelly Parker left about three-quarters of the way through the agenda due to another commitment so Council President Randy Stelling handled the remaining business.

The executive session to discuss city business manager candidates and the firefighters' union contract did not produce any results. No action was taken on either topic when the council returned to open session.

Alva Police Chief Ben Orcutt made the presentation of the Gary Sanderson Scholarship. Sanderson preceded Orcutt as police chief. A panel of citizens and police department representatives usually makes the decision on the scholarship recipient. This year no one from the police department was involved due to conflict of interest.

The scholarship is presented to an Alva High senior who is attending Northwestern Oklahoma State University, and Orcutt announced Sammy Hawley as the recipient of the $1,000 scholarship. She is the daughter of Assistant Police Chief Patrick Hawley.

Gail Thomas from OEDA spoke to the council about a capital improvement plan grant. She said Alva applied for the grant and was put on a list. Now she is ready to start working on the project. Thomas said the project focuses on two areas. One is the inventory of larger ticket items like buildings and equipment. She said the inventory does not include small items like hand tools. Evaluation of the city's infrastructure is part of the process. From information gathered, Thomas will produce maps of the infrastructure such as water lines, manhole locations, etc. She said the last time Alva had this done was in 2012.

The second part of the project is to set priorities for a five year plan. It involves identifying projects and prioritizing them based on urgency. The end result will be wall maps and field books made of the map sections that can be carried in vehicles.

Thomas said she will need the cooperation of the most knowledgeable public works person to help her, and the project must be completed in 12 months.

Mayor Parker said the city will be required to fund the project "up front" by paying the costs, but the Department of Commerce (DOC) will then reimburse the city. The DOC authorizes $40,000 for the project.

Taylor Dowling made a motion to approve the resolution for obtaining and administering the DOC grant from community development funds with Sadie Bier seconding. The motion passed unanimously.

Thomas then brought out more paperwork including more resolutions that need to be approved. Apparently, she sent the entire packet to Mayor Parker, but he didn't realize there were more resolutions involved. Since those weren't on the agenda, the city council will need to hold a special meeting before the end of June to address the remaining resolutions.

A public hearing was held June 13 on city budgets but no members of the public attended to make comments or ask questions. The budget resolution must be passed by June 30.

The FY22-23 General Fund budget totals $5,288,120 in revenue, $336,763 in transfer mainly from the utility authority, and expenditures of $5,622,627. Parker said the budget includes a four percent COLA increase for employees and 522 EMS District funding. Stelling made a motion to approve the budget, seconded by Bier.

The budget was approved by a 5-2 vote with Dowling and Brooks voting no.

Jerry Welch from OG&E attended the meeting to answer questions about the $47,092.97 bill on the agenda. Earlier in the year, the city paid several large OG&E bills caused by delays in the lighting bills. This was due to OG&E replacing old lights with LED ones. However, the city thought that was all finished.

Welch said the conversion is not finished, and that's the reason for the latest bill. It includes $36,258.52 for overhead street lighting in April, May and June. He explained that the electric usage of the new LED lights must be matched up one-to-one with the old lights so the city is not double-billed. This causes the delay in billing.

OG&E has about 200 lights left to convert, Welch said, and they are doing the billing audits monthly. "It will get better," he promised.

Stelling made a motion, seconded by Greg Bowman, to pay the OG&E bill and it passed unanimously.

The ordinance for the Alva Recreational Complex (ARC) has been changed to put the city parks and swimming pool under the oversight of the ARC Board while renaming the board to Parks and Recreation. Before voting on the ordinance, Dowling asked about the clause stating the board can't dispose of any real property but they can authorize leases. Mayor Parker said the ARC board already can approve leases like concession areas so this is not a change.

Dowling was also confused about a part of the ordinance saying the mayor was responsible for filling vacancies on the board. He asked if two vacancies occurred, could the mayor be appointed to fill both vacancies. Parker said no. The ordinance amendment passed 5-2 with Brooks and Dowling voting no.

After the vote, City Attorney Rick Cunningham clarified that the language saying the mayor was responsible for filling vacancies meant the mayor would appoint citizens to fill vacancies with the appointments to be approved by the city council. It does not mean the mayor himself will fill the vacancy by serving on the board.

At this point, Stelling took over the meeting as Parker left. The council quickly approved a school resource officer contract with Northwest Technology as in past years.

They authorized the mayor to sign the offer letter from the Oklahoma Department of Transportation in the amount of $10,155 for a right of way along US-281 along city airport property. That was approved the previous week by the airport commission.

A resolution amending this year's budget to increase the Street and Alley budget by $95,123 was approved.

A resolution increasing this year's Tourism Tax budget by $40,000 was approved by a split vote. Dowling and Brooks voted no.

The Airport budget for this year was increased by $40,000 in a 5-2 vote with Dowling and Brooks voting no. The airport budget revenue and expenses both increased due to the increased demand for Jet-A fuel at the airport.

Councilmembers voted unanimously to lease the cemetery farm ground to Roger Hada for $9,200 per year. The Harper Road site farm lease to Scott Hess was approved for $1,189.50. 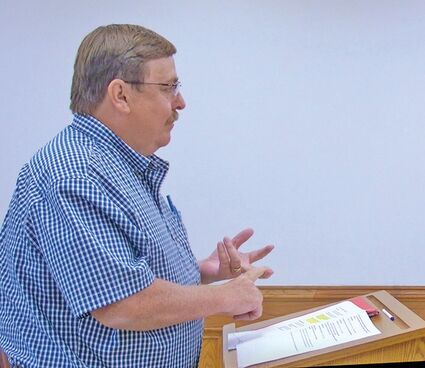 Jerry Welch of OG&E explains the large electric bill to the City of Alva includes three months of street lighting. He spoke at the city council meeting June 20.

The Alva Utility Authority met after council adjournment. Trustees approved minutes of the last meeting, claims of $208,504.91 and payroll expenses of $76,731.54.

The Alva Utility Authority budget for FY22-23 was approved with Brooks and Dowling voting no.

Council members then convened as trustees of the Alva Economic Development Authority. They approved minutes of the last meeting, claims of $24,021.00 and payroll expenses of $21,318.97.

The FY22-23 budget was approved with Dowling and Brooks voting no.