Wheat harvest recap: the drought was ugly and a few other takeaways 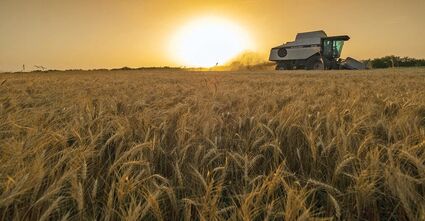 Oklahoma's hard red winter wheat harvest is complete as farmers close the book on a season plagued by drought.

Amanda de Oliveira Silva, Oklahoma State University Extension small grains specialist, said yields varied across the state depending on rainfall. Many fields in southwest Oklahoma were abandoned, and other dry areas reported anywhere from 10 to 25 bushels per acre.

"The state average is around 20 to 30 bushels, but a few areas that received timely rains received 65 bushels," she said. "The north-central area did well, but the Panhandle was just very drought stressed. Many farmers out there didn't see a rain since planting and basically went the entire season without rain."

Recent data from the U.S. Department of Agriculture National Agricultural Statistics Service shows this year's Oklahoma wheat production was forecast at 64.8 million bushels, which is down 44% from 2021. The NASS average yield for Oklahoma was expected around 27 bushels, down 12 bushels from last year.

"On top of rain, we also had some issues with diseases like Fusarium root/crown rot, that impacted fields and added to the variability we saw," Silva said. "We had brown wheat mites, which are usually not typical but occur in years that are really dry."

"In early June, wheat was around $11 a bushel for the first three weeks of harvest, but then the crop moved into Kansas and more wheat entered the pipeline. Russia also reported that it was going to export above average wheat this year, and we saw a $3 decrease in price," Anderson said.

Despite higher fuel, fertilizer and other input costs, Anderson said many producers can still make a profit if they sell their wheat for at least $8.75 or $9 a bushel except for those in southwest Oklahoma where yields were extremely low or did not exist. In the current volatile market, daily price fluctuations and overall input costs are the biggest factors.

"Looking at next year, the big questions are how high will wheat prices stay and how much will fertilizer costs account for a producer's total production costs?" he said. "At the present time, the market is predicting an $8.50 wheat price for the 2023 Oklahoma wheat harvest."

Next year is also on Silva's mind as she and the OSU wheat team evaluate what producers can learn from the 2022 harvest. Certain wheat varieties are bred to thrive in dry conditions, but she said in some cases, this year's drought was so severe that it was impossible for any variety to prosper. However, there were a few takeaways.

"With variety and management, depending on environmental conditions, I would not limit my crop to nitrogen because that can help improve water use efficiency," Silva said.

Research conducted by Brian Arnall, OSU Extension specialist for precision nutrient management, suggests producers can apply nitrogen later in the season than originally thought - past jointing in wheat - allowing a wider window of opportunity to manage a crop with nitrogen.

When planning for 2023, Silva said producers will have difficult decisions to make on input costs, such as nitrogen, and need a conservative spending strategy.

"It was a tough year, but our producers are resilient and did very well, considering the challenges," she said.