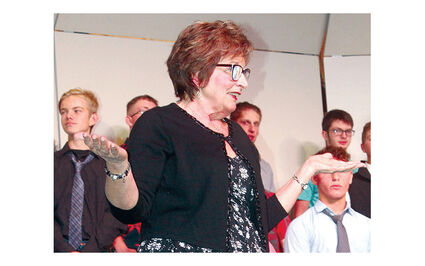 If you had a child or grandchild in school at South Barber (in Kiowa) or North Barber (in Medicine Lodge), you most likely saw Cathy Cox direct that child in a vocal music concert, an operetta, a fun elementary music program, or a Veterans Day Service.

Besides her 48 years in education, Cox wears many hats beyond vocal music director. She's also a school counselor, a longtime EMT, choir director at the Community Congregational Church in Kiowa, was instrumental in helping start the Border Line Theatre in Kiowa where she was a cast member in countless productions and served on the board for 25 years – to name a few of her activities.

"I feel fortunate to have worked with Cathy in her last few years of teaching," accompanist Nikki Brattin said who is now full-time fourth grade teacher. "I'm amazed at Cathy's talent to switch and sing any part at anytime during a song and sing it well. She is a talented vocalist. She is and was a wonderful teacher who dedicated her life to the profession. I know if it was up to her she would continue teaching to this day."

Growing up in a musical family in Wichita and graduating from Wichita West High School, Cox graduated from WSU with a music degree in 1973. She later earned a master's degree in guidance counseling and psychology from NWOSU in 1995.

Her first teaching job was in Lincoln, Kansas, where she stayed four years. Then she taught vocal music at South Barber from 1977 to '89. Cox taught in Sharon one year before that school closed and merged with Medicine Lodge. She followed those kids to Medicine Lodge where she taught 10 years. When the Sharon school building became the Learning Center through the special ed co-op Cox spent several years working with students there. She was counselor at the school in Anthony two years. Through the years she was assistant coach for tennis, basketball and volleyball. "I was really terrible at basketball," she said laughing.

She returned to South Barber where she was counselor and taught high school vocal and eventually elementary music. She split her time for awhile with counselor and vocal music teacher Cheryl Washburn.

Cox said, "I think all kids should be in choir. You learn a lot more than singing in choir. It's a discipline where you learn self-control, confidence and teamwork. Kids learn direction and how to respond. That's in band, vocal – everything."

"I tease kids a lot. But, it wasn't always just fun. I think the secret is you have to really like kids and love them for who they are – not try to mold them into being you. You have to allow kids their freedom and let their own personality shine through within reason." She said it's a balance of letting them sing what they want and what is appropriate.

"When you're teaching music you love the minute where you are," Cox said of teaching K-12. "I liked teaching junior high best in the classroom. If you can get them to buy in they'll do anything for you. They are good kids."

"At the high school level it's more about teaching technique and music. It's sound and voice and the structure of music. It's more about where's the passion in it – how do you make this the best emotional experience a kid can have?"

Through the years Cox said she and her students had fun with non-stop practical jokes. "I fed kids all the time. At the end of the day they are so hungry. Kids remember things like that. All in all, kids are tender-hearted – they don't always show it. They have the power to make you laugh or cry. That's for sure."

Laughter came easily to everyone when she talked South Barber alum Josh Myers into riding a tricycle in front of the crowd as "The Little Old Lady from Pasadena" at an alumni reunion.

Students Remember Their Time with Cox

While teaching at Medicine Lodge, Cox got a show choir going. She only had four kids interested and said, "So I was challenged to go room to room and recruit. I got a bunch a kids who couldn't sing but showed confidence." They went to contest as an ensemble and got a I rating. "Then everyone wanted to be in choir. They had to try out for show choir. It was really a fun ride!"

The show choir had 24 and choir had 104 students. Cox said they survived in a little room with no AC.

For a week in the spring Cox took the show choir on a one week tour, mainly performing in western Kansas schools. Because of someone she knew they got to perform in Colorado Springs/Estes Park. They had fundraisers to pay for the trip. A highlight was going out to a "really nice restaurant for dinner."

Cox said those kids did the "Mississippi Squirrel Revival" by Ray Stevens. "It was wild!" Her student Chris Goering portrayed the Ray Stevens guy. "The kids had to memorize a lot. They had a fake squirrel on a fishing line going across stage. Everyone loved it. We were well-received. It was big fun!"

"These were really good kids," Cox said. "They were also good athletes and scholars and really knew the value of rehearsal in everything they did. That kind of discipline was their whole life at school. They won some state titles this year. They were always good at football, forensics – all that they did. If you can get that in every area of their life and they desire to do that, your job is really easy as a teacher."

"I loved show choir. It was my favorite thing," Cox said. Feelings were mutual from her students about her. Chris Goering was one of those students. He remembers he tried out for sound man.

Goering said, "I've loved music my whole life. But I had an experience seven or eight years prior to that when I was told vocal music would not be for me. I got in Mrs. Cox class and she drafted me right into show choir. At first I saw it as a great way to hang out with my friends and I would really have an hour not to do much my senior year. Turns out it was a terrific move for both of us. I hadn't been in vocal music since fifth grade. It's sad I missed all of that. We had a wonderful time!" Goering remembers getting the I at state contest and singing in all the group did.

Goering is in his 23rd year of education as a professor of English at the University of Arkansas. "I use music in the context of teaching English," he said. He's released three albums of Americana Okla/Texas country. He sings, plays bass guitar with the Sharon-based Aaron Traffas Band. Their music can be heard on Spotify and other popular sites.

"A lot of what I do has to do with Cathy Cox." Goering said. He credits her for giving him "that spark on the music side of things."

"What she gave me is a big part of my identity. Mrs. Cox did that for everybody. It was a tremendous life altering experience."

Another one of those students in Cox's show choir is Ryan Cunningham who is the new superintendent at North Barber USD 254 in Medicine Lodge. When asked to comment about his choir director, Cunningham said,

"Show choir tours are some of my best memories from my time in school. We had a job to do, but we always had fun doing it. Mrs. Cox made sure of that. Mrs. Cox had high expectations and gave us every opportunity to be successful in whatever we were doing. The smile on her face at the end of a great performance is something I will always remember. Mrs. Cox created opportunities for us that not very many students in schools our size were able to experience. I am thankful for her and the job that she did at Medicine Lodge High School."

Cox fondly remembers MLHS Principal Milton "Bud" Moore who recruited her to the Sharon Learning Center and ML Superintendent Mr. Girrard. "The two of them together were big backers," she said.

In 1993, Cox received a Master Teacher award at Medicine Lodge. It's a state award for going above and beyond the call of duty.

Cathy married Jim Cox in the Hardtner Park in 1980. That's three weeks after she passed her EMT. Their now grown children are Katie and Kevin. Cathy credits her husband for keeping the fires burning at home with her crazy schedule. "Jim always took care of what I couldn't and he didn't gripe about it."

The kids were about junior high age when she was teaching at Medicine Lodge, would come home a few minutes and head to Alva for classes at NWOSU while she pursued her master's degree.

"I missed a lot of my kid's programs. There were lots of sacrifices," Cox said. She's been church choir director over 30 years, including handbell choir director many of those years. With almost 25 years with Border Line Theatre, she said, "I'm not sure how we did it all." "I can't say I regret too much of it."

"Everywhere I went, I made great friends," Cox said of her colleagues. During her earlier days at South Barber she remembers developing strong friendships with Julia Fritze, Veda Holt and Pat Noble.

Noble commented about her friend, "Cathy is a person with a vibrant personality which permeated throughout her teaching. I remember well her elementary school programs – especially the little operettas she produced. Students would shine on stage. She had a way of getting the best out of students – from kindergarten through high school. She was instrumental in getting the Veterans Day Program up and running at South Barber."