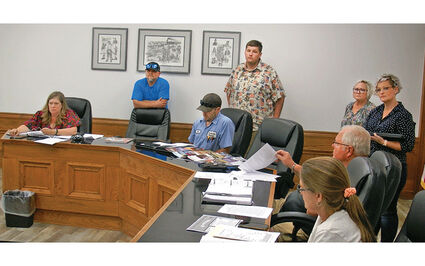 At the end of the one and one-half hour meeting, Ritter announced that he will be resigning from the committee with December being his last meeting. Ritter has been on the committee since it was first formed following the 2000 approval of the tourism tax ordinance.

After approving minutes of the last meeting, committee members looked over the financial report. Chamber Director Jodie Bradford-Stevison listed funding grants still to be paid and said there is $386,034.68 available for grants.

Ritter noted the reports show the committee has $41,500 less in the bank than this time a year ago. The committee still has questions about erratic payments from some hotels or motels. Barton asked what needs to be done to collect the tourism taxes. Ritter said the city clerk has a lot of power to collect. Mayor Kelly Parker who was sitting in the audience said the city needs to get back to the conversation that was ongoing while former business manager Angelica Brady was still with the city.

Ritter reminded the mayor that the tourism committee passed a motion earlier to spend up to $15,000 for an audit of the tourism tax.

There was some confusion about the new financial report prepared by Crawford and Associates. It was in a new format that was difficult to compare to the old one. Parker said he could ask the accounting firm representative to attend the next meeting to clarify the report.

Barton made a motion to table the financial report, seconded by Kline, and the motion passed unanimously.

Brenda Hood appeared on behalf of the Alva Mural Society to talk about the second Northwest Mural Fest. It is planned for Oct. 1-3, the same weekend as the Northwestern Oklahoma State University Family Day.

Last year, the event spent $4,887.16 of the $6,500 granted in tourism tax. This year, they are requesting $7,150. Instead of three mural artists like last year, this event will include four artists. Friday evening the artists will be at the Graceful Arts Gallery for a "meet the artists" event. On Saturday at 8 a.m. there will be a Mural Fun Run. Artists will be painting Friday through Sunday with artists signing their paintings beginning at 1 p.m. Sunday. There will be live music, food trucks and a children's train downtown on Saturday until the 3 p.m. football game at NWOSU.

Besides the additional artist, Hood said this year's murals will require more pre-painting preparation since the building owners don't want the murals painted directly on the walls. Although some locations are to be determined, Hood said one of the paintings will be located behind the large golden wooden wings located on the north side of the Sanctuary Massage building. The themes of the murals will be decided between the building owners and the artists.

The funds requested will go toward artists' fees, wall prep, advertising and artists' hotels. Barton made a motion, seconded by Martin, to approve the $7,150 request and the motion passed unanimously.

After three other meetings with the tourism committee on their memorandum of understanding (MOU), the Alva Chamber came fully prepared Wednesday. Chamber Vice President Magen Lehr narrated as she moved through a series of video images explaining the tourism services the Chamber provides.

Much of the presentation was on digital media marketing with statistics on email, Facebook, Instagram and web site contacts. The Chamber took over responsibility for updating the VisitAlvaOK.org site which was originally paid for by the Tourism Tax Committee. In addition, they maintain an Alva Chamber web site.

At the end of the presentation, Mayor Parker said, "If you look at the (tourism tax) ordinance, and under Section E your responsibilities, if not for this relationship with the Chamber, how do you accomplish these things?"

He read from the ordinance, "These are your responsibilities. Whether that's item 1, promoting public awareness and education as to the value of tourism and conventions. Do you do that? Without this relationship to the Chamber, do you do that?

"No. 2 is gather information and ideas; conduct research; develop advertising, promotional programs, materials, equipment; travel to conventions, trade shows and events to promote the city's image so the city will be developed and maintained as a convention, tourism and recreation center. How without this relationship between the tourism committee and the chamber do you do that?" 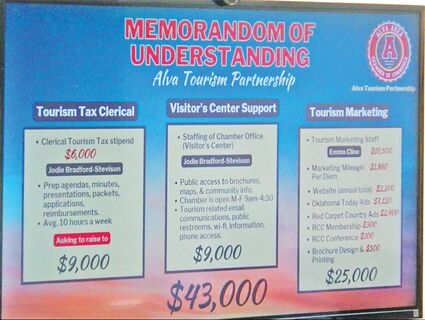 Ritter said the Chamber only goes to Red Carpet Country events so doesn't fill all those roles. Parker said without the Chamber none of this would be done.

Parsons said after viewing the presentation, she could see the benefit of the MOU; however, she was not totally on board. She emphasized, "I just want accountability."

"This tax was made to help Alva with tourism," concluded Barton.

Martin made a motion to approve the MOU with the Chamber, seconded by Barton. When the roll was called for voting, Parsons paused and then asked, "This is good for one year, right?" She was answered in the affirmative, and she cast a yes vote. The motion passed unanimously.