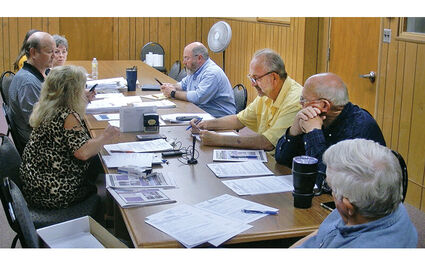 In Major County in 2018, DCP accepted a court settlement value for county taxes of $52,750,000. In 2019 DCP protested their Major County taxes giving a value of $21 million. According to Jerry Wisdom of TASC (Total Assessment Solutions Corp.), when the Major County Board of Equalization asked how the fair market value could drop 64.25 percent in 45 days, Scott Crisler responded, "That is how the game is played." Crisler is a senior manager at DCP Operating Company LP.

On Wednesday, July 20, the Woods County Equalization Board held a formal hearing to consider four tax valuation protests. A report on the hearing with Targa Mid-Con West OK was published in the Friday, July 29, Alva Review-Courier.

Before the board began the hearing with DCP, there was a discussion of a new Oklahoma law affecting the hearings. House Bill 4413 which was passed by the legislature and signed by the governor contains more guidelines for hiring third party assessors. Many county assessors use third party companies, such as TASC, to help determine the worth of high-value properties.

Wisdom said this new law will keep him out of equalization board hearings next year. He can continue to work with assessors doing investigations; however, he cannot be in the same room or be involved in the discussions during either informal hearings or formal hearings. Protesting companies first go to an informal hearing with the assessor. If the matter is not resolved to their satisfaction, they may file a formal protest for a hearing by the county equalization board.

Crisler was given the first opportunity to speak. Referring to a printed presentation provided to the board, Crisler said, "Year over year we're relatively flat in volumes." He said over the past four year volumes were down about 40 percent. He also discussed margins, the revenue from gas sales minus gas purchase costs associated with those earning. "We're down about 16 percent looking at that margin we had four years ago," he stated.

He also talked about EBIDA, earnings before interest, depreciation and amortization. He said in Woods County, "over the last four years we're nearly a million dollars down, and that's quite a significant decline."

The Woods County valuation for DCP for 2020 and 2021 is still in litigation. For 2022 the county valuation is $11.4 million for DCP. Crisler said, "There's a disconnect." DCP is showing results and lower value but their fair tax value from the county "is actually up over all about six percent."

Crisler said sales of assets in other counties around Woods County are going at 65 to 75 percent of fair market value "showing devaluation of assets." He is asking the county to approve his valuation of $2.1 million.

Seivert questioned the "significant spread" between the EBIDA figure and the margin. "Is that unusual to have such high expenses," he asked. Crisler said he couldn't speak to what competitors are experiencing, but it looked typical to him based on a four-year trend.

Seivert asked if this was an area of concern for DCP. Crisler said the mid-continent region is not a strong area for DCP. "We don't make very much money there, and we have no capital growth. It's a depleted area, and we don't look at that as a potential growth opportunity for us," he said.

Speaking on behalf of the county, Wisdom said, "This feels like to me 'Ground Hog Day' again. This is the seventh year that Scott Crisler has been before this board, each ending in litigation. It's a continuing trend, and I guess it will continue into the future."

He told the story of the Major County incident described at the beginning of this article.

Wisdom pointed out that Crisler states his financial information is from allocated results, not actual.

Looking at the 901P form submitted to the county by DCP, Wisdom said begins with the total acquisition costs or current replacement costs of assets. He said instead DCP's report uses 2015 figures from the Oklahoma Tax Commission (OTC) manual. He said those figures have increased by 160 percent since 2015.

The figures also show an expense ratio of 88.88 percent while the average expense ratio for the midstream industry in 2021 was 21.53.

Wisdom added, "He has not used physical deterioration for loss of value. He has used economic life instead of physical life. Most of these pipelines physically last 100 years; that is one-percent depreciation." He also went over the cost of meters referring to the OTC manual and concluded those were valued at 51 percent of replacement cost new.

Wisdom said in the end, the value is not right because the statement didn't start with current replacement cost and used economic life instead of physical deterioration. He termed it "garbage in, garbage out." He had a lot more to say about the financial information provided, but in the end the result was the same as in the Targa hearing.

The 2022 tax valuation protest will continue to district court while the tax payment will be held in escrow.

During a short recess, Wisdom and Mitchell left the meeting. Attorney Peter Bach represented the two companies listed for the final two hearings. He attended by telephone.

Bach used the income approach to value and cited declining revenues and decreased values in the industry. Tomberlin said she didn't trust the numbers provided. She said nationally recognized 2021 sales of hotels across Oklahoma support the cost approach of the county. "We don't have a good market income approach," she said. "We're not getting what we asked for (income statements)."

In each of the cases, the equalization board voted to uphold the value assessed by the county.

A video of the entire meeting may be viewed at http://www.AlvaReviewCourier.com.