Meet Bollinger in person Wednesday at Cancun at 5:30 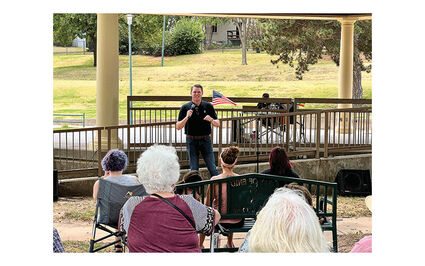 Jason Bollinger speaks about extremism in the government to the Garfield County Democrats at Government Springs Park in Enid. "The crowd agreed," Bollinger said.

A lot of people told Bollinger not to run for Senate. "'A Democrat running for an Oklahoma office, what are you doing? Lankford has all the money'," they'd tell him.

But the rising tide of mistrust and division pulled him back home.

"One of the reasons I was excited to get into this race (is that) I know that Oklahomans are not as divided and are not as extreme as the politicians and the media are telling them they are. And so that's why I came back to Oklahoma.

"I practiced law in Oklahoma City, and I watched, with the rest of the world, on Jan. 6th as James Lankford rose (to object to the electors being accepted, a move he later retracted) as part of an insurrection on this country, and there is absolutely no other way to put it. It all appears to have been coordinated, and although he ultimately voted a different way, he had certainly been part of the push to rile that base up. And we've seen him since Jan. 6 continue to pander to that extreme right wing that is dangerous to our democracy. I think James Lankford himself is dangerous to our democracy and to our institutions."

"The majority of Oklahomans did not support overturning Roe vs. Wade," he said, citing numbers from an Oklahoma City news outlet stating a bare majority – 54 percent – opposed overturning Roe." He thinks that, similarly, most Oklahomans wouldn't support stripping the LGBTQ+ community of their right to marry, "which we also know is on the chopping block because of this Supreme Court," he said.

"And what the heck is he doing on the southern border? I don't know, other than pandering to a certain base and trying to govern with fear," he said.

"Oklahomans are looking for people who work toward solutions rather than engage in political stunts; Oklahomans are supportive of our freedoms and don't want to be made fearful of one another."

The Party Politics Must Stop

Bollinger illustrated his point that elected lawmakers are, too often, engaged in party politics rather than addressing the issues confronting the people they represent, with this anecdote.

He was working at the U.S. State Department involved in renegotiating NAFTA, which is an agreement that deeply impacts ranchers and ag producers. He received a request for information from a congressmember – something that happens a lot – and he saw it was from Oklahoma Senator James Lankford. Bollinger assumed Lankford was concerned about the details of the NAFTA negotiations, since he has such a large rural population to represent.

"But no. James Lankford was seeking information on Hillary Clinton's emails. This was two years after she had lost the election," Bollinger said.

"So, that's just one example of the people we send there to work for us, but they are beholden to their big money donors – many of them outside the state of Oklahoma. They're beholden to lobbyists, many of whom know nothing about what's going on in Oklahoma. And they're beholden to party elites," Bollinger said.

"And I know, regardless of party, Oklahomans do not send people to Washington to do what party elites tell them to do. They send them to Washington to address the issues that we're facing on the ground here in Oklahoma, and that is not what I saw happening there."

Is the pressure from lobbyists and people with wads of money just too great?

"It's not as if they don't have a choice," Bollinger said. "The choice is to do what they're supposed to do – and potentially lose an election or have the lobbyists and the out-of-state money dry up or go to prop up another candidate. But if you're not going (to the Capitol) for noble reasons, if you're not going there to do the work for Oklahoma, then what are you doing there?"

He seems to have little respect for Lankford these days.

"Lankford – everything he's doing is to pander to the media, to pander to extremism," he said. "His stunts on the border – you know, he contradicts himself in the statements he puts out because he's playing mental gymnastics to get the Republican talking points across. It's not what's actually going on and it's not his job," Bollinger said vehemently.

Born and Bred in Oklahoma

Bollinger was born and raised in rural Western Oklahoma, where, he said, he learned the values important to all Oklahomans through his parents, a teacher and a city manager.

He graduated from high school in Elk City, then earned an associate degree from SWOSU at Sayre. He went on to the University of Oklahoma where he earned a bachelor's degree in accounting and then a law degree.

Bollinger worked in Washington, D.C., at the U.S. Department of State, working with the top levels of government, and representing the U.S. In a "dispute against one of its greatest adversaries," as Bollinger's bio puts it.

Today, he has an Oklahoma City-based law practice.

And now he's putting his beliefs (and his fortitude) to the test with a run for the seat Lankford has held since 2015.

Protecting Access to Reproductive Healthcare and Women's Rights to Bodily Autonomy – This means protecting access to reproductive healthcare services and defending women's rights to make their own healthcare decisions. "At both the federal and state levels, lawmakers are working to roll back rights and make those who give birth second-class citizens," his platform states. He's supportive of legislation currently stalled in the Senate that would codify the protections set forth in Roe v. Wade into federal law.

Protections for the LGBTQIA2S+ Community – The Equality Act, once passed in the Senate, would make the LGBTQIA2S+ community a protected class with rights codified in law. The platform states, in part, "... true 'liberty and justice for all' means that we are all free to live as our true and authentic selves. It's about time an elected official from Oklahoma defends the most vulnerable among us rather than attack them."

Protecting and Promoting Tribal Sovereignty and Partnership – With the McGirt decision finally giving recognition to treaty rights ratified by the United States Senate, Bollinger's experience at the U.S. Department of State will come in handy, because he already understands how diplomacy between governments and tribal partners work.

Protecting Our Environment and Investing in Our Future – Oklahoma has an abundance of renewable resources and technologies that could keep the state at the forefront of the energy industry while also preserving our environment for future generations. Bollinger's platform calls for bold investments in resource development, workforce training and infrastructure development. Solar, wind and hydro-electric power can create clean sources of energy and high-paying jobs for Oklahoma's energy sector workers.

Other components of his platform would be road and bridge repair, and improving access to high speed internet in rural areas. "Oklahomans pay taxes to ensure these critical needs are met, and we have seen little return on our investment in years." Bollinger's platform statement said. Education must be prioritized.

Bollinger is also calling for comprehensive reform of the nation's immigration system, while noting that the U.S. is seen around the world as the land of opportunity, and that diversity enriches us all. He also emphasizes the need for security around elections that are free from foreign interference. 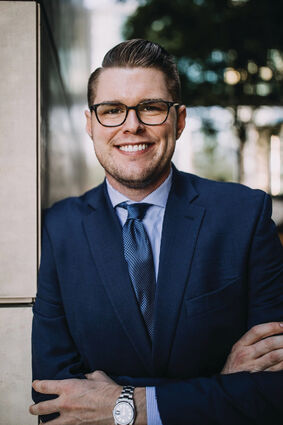 "He is the real deal," said Karla Horn, the Woods County Democratic Party chair, after listening to him last Wednesday evening via Zoom in an Alva meeting. "He gets what rural Oklahoma goes through. I was brought to tears thinking that a representative might actually get what we go through."

"I think Jason said it best: 'We need solutions, not stunts.' He wants to hear from all Oklahomans and to fight for what really affects our lives and livelihoods instead of grandstanding and pulling meaningless stunts at the border like Lankford," Horn said.

Bollinger will be in Alva on Wednesday, Aug. 3, at 5:30, to meet people and answer questions. The free event, open to the public, will be at Cancun, 503 East Oklahoma Blvd.