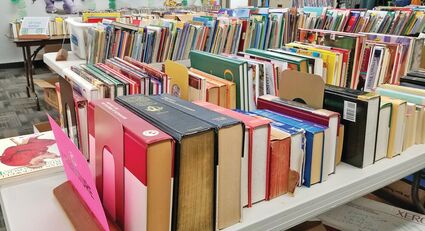 Summer programs were very popular at the Alva Public Library as shown by the number of participants. On week seven, there were 32 kids participating in the Summer Reading Program. The Little Explorers had as many as 28 kids attending. A couple of movie days in July brought in 18 kids one day and 11 the next. The two Lego days in July were attended by 13 kids and 23 kids. There were also a couple of days spent in activities on the courthouse lawn.

Library Director Sandra Ott said the Summer Reading Program was very successful but it was very labor intensive for the staff. Youngsters attending were split into different groups by age. One age group ended up with three divisions. Next year the staff will look at ways to handle fewer groups. Although the program took some parts from the state program for summer reading, Ott said the staff added more materials to make it fit Alva's longer schedule and to tailor the topics to local interests.

The library ran into a lot of conflicts from other activities in June so they are considering starting the summer reading program in July when other programs slow down or cease.

The Lego days were very popular and will continue during the school year.

Eckhardt said he was able to watch the rocket launch last month and was impressed. Ott thanked Dr. Steven Maier for his work with the program. She said if other groups are interested in exploring rocketry, the library has launching equipment that could be checked out.

The Book Sale began Aug. 8 and will continue through Aug. 20 in the basement auditorium of the library. Books are arranged on tables with categories labeled for easy selection. No prices are marked. Instead shoppers are asked to leave whatever donation they wish.

The books usually come from donations to the library. If the books are not needed in their collection, they are offered for sale. Ott said instead of one sale per year, the library plans to have two smaller sales. The next one will be around spring break.

Ott said she completed the annual report to the Oklahoma Department of Libraries and is confident the Alva library will qualify for state aid.

She reminded board members that this and a lot of other state funding is dependent on people filling out the free and reduced lunch forms when enrolling students in school. She said even if families intend to pay for children's lunches, the forms help in funding opportunities.

After focusing on youth during the summer, the library staff is turning their attention to adult programming for the fall. Ott said they have some interest in reactivating the crochet club. There has also been interest in a club to share various handwork interests and techniques. A game group is being considered, possibly featuring family games. The staff is making of list of suggestions.

Ott said night programming is difficult because at least one member of the staff is required to stay after hours. That can affect their budget which does not allow for additional hours.

The library will continue with Little Explorers for preschool children accompanied by an adult. They also plan to continue the Lego days. They are working on other activities for elementary school age students.

Ott said the board should have held an election in the July meeting for new officers. She will have it on the agenda for the September meeting. Wilt has served as chairman for several years and would like to step down from that position. "Other people need some practice with it," she said. Wilt wants to continue serving on the board, just not as chairman.

Bill Johnson Correctional Center in Alva has expressed interest in restarting book checkouts. Ott said that was stopped with the pandemic. Only paperback books are allowed, and the Alva library has a limited selection of those. However, they will work with BJCC to restart the program.

When asked if leftovers from the book sale could be donated to BJCC, Ott said appropriate paperbacks will be donated to the prison and also to the Woods County Jail.