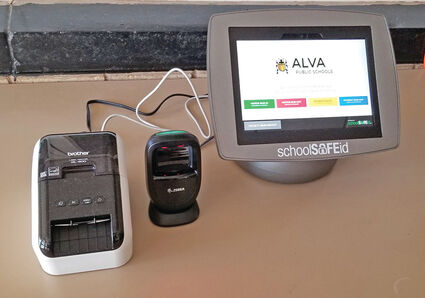 This equipment is part of the school safety protocols in the Alva Public Schools. Visitors insert a driver's license into the scanner. This triggers a quick background check. Then, if the visitor, is cleared, entry is allowed to the building.

Much of the special Alva Board of Education meeting Monday, Aug. 22, was about construction projects, but board members also handled some personnel items.

Superintendent Tim Argo reported Mike Shklar has resigned. Other teachers have stepped in to cover those classes.

The board voted to approve an offer of employment to Mikayla Cox as a paraprofessional. She will be working at Washington Early Childhood Center where she replaces a para who resigned.

Adjunct teachers are those who teach classes outside of their teaching certification. The board approved speech teacher Nick Bradt to teach one class in guitar for an art credit. They approved Mary Tyree as an adjunct to teach pre-algebra.

Representatives of Kyler Construction, the school's construction manager for projects, and TriArch, the architectural firm for the school projects, were present for the meeting. Bids were opened for the HVAC project in the new (1999) gym with an alternate to add HVAC in the older gym.

After the low bids were tabulated, the lowest and best bid for the new gym was $216,115.39, which would come out of the building fund. Supt. Argo provided figures showing the school has $809,423.62 in ESSER III approved funds that can be applied to the project, leaving a balance of $1,025,428.00 to come from ad valorem taxes going into the building fund.

Showing building fund collections since the FY18-19 school year along with building fund expenses for those year, Argo said the projected carryover after HVAC systems were installed in both gyms would be $2 million.

The biggest challenge the project faces is ordering and receiving HVAC units. Currently that process is taking a minimum of 36 weeks. Work on the gyms is planned to start following basketball season in the spring of 2023.

Board member Shane Hansen asked about a bid specification for asbestos. In the old gym, there is boiler piping that would have to be removed and it has an asbestos covering. Board President Jane McDermott asked about the possibility of air conditioning in the lobby of the gym in the future. Board member Tiffany Slater asked if an estimated cost had been determined for the snake or serpentine drive project behind the high school. She was told that project cost has not been determined.

Supt. Argo said since the school is using funds from regular ad valorem taxes, they may have to wait a little longer on some projects. He said he will probably bring the board a plan or list of future projects at some point to let them decide on priorities.

As the board members discussed whether to include air conditioning the old gym, Dr. Vicki Nighswonger, high school principal, told them the old gym is used for more than athletics. She said some other classes also meet there.

Board members voted unanimously to approve the HVAC projects for both high school gyms.