The long and winding road ... 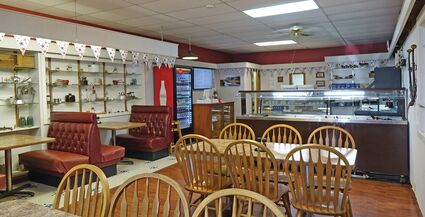 The salad and potato bar is near the back of the dining area.

Robyn Landis has only been living in Alva for a week, and she's traveled a winding road to be here. Her new restaurant, Chubby Dave's, held its ribbon-cutting Aug. 18.

"I was originally in a building in Freedom, but the building needed so much money to repair" that she decided it would not be cost-effective. "Then I tried it in Waynoka, and the rent fell through. Then this place came open and here I am," Landis said with good humor.

Before all this began, Landis had a small-town cafe in Kansas, and found she really liked the work, the lifestyle. "I just enjoy it," she said simply.

Her newest restaurant, Chubby Dave's, is located at 530 Flynn St. The previous business in that space had been a sandwich shop.

"Sandwiches wasn't really the road I was going to take," said Robyn, "but that's the opportunity that came up. But I'm okay with this, and this may lead to something bigger." Her current space, perfect for a sandwich shop, has too small a kitchen to support a more ambitious menu.

Chubby Dave's serves all kinds of sandwiches, from the classic club, Montecristo, Reuben, and sub, to sandwiches as original as the customer who designs it. The restaurant also has a salad bar and a baked potato bar. A daily soup is also offered. Four employees help Landis get everything done.

The sandwich shop has a retro vibe, with countless antiques, old kitchen items and toys displayed on shelves lining the walls.

Fine-tuning by Listening to her Customers

Along with the usual lunch crowd, Chubby Dave's initially offered breakfast sandwiches in the mornings, "but it didn't do real well," said Landis. "More people were talking about wanting to eat after they got off work." 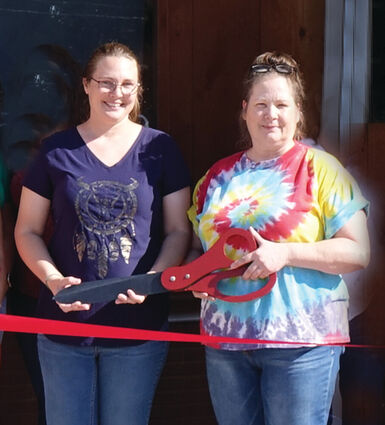 Heidi Cook (left) and Robyn Landis smile as the ribbon-cutting ceremony gets underway.

So Landis listened, and last Wednesday extended her hours until 7 p.m. On that first day (the day before she spoke with the Review-Courier), she said, "we did better than all the breakfasts" combined.

A New Life in Alva

Landis had lived in Freedom since 2016, cooking in the school cafeteria for three years. After that she worked at Cargill for a couple years. "Between the school and Cargill, I tried to be a postman, but it's all walking," and her body just wasn't up to it. Through it all she provided private catering services.

And now, she has a new community to fit into.

"I love this small town, where everybody is very friendly, very supportive despite all the ups and downs – the Chamber, the public, everybody."