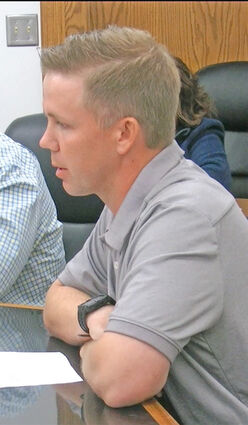 Ward 4 City Councilmember Connor Martin resigns his position at the end of Monday's meeting. He said that would be his last meeting.

The Alva City Council and authority meetings concluded Monday with the announcement by Connor Martin that this would be his last meeting. He has been serving in the Ward 4 position for six and one-half years.

Martin spoke about his time on the council and addressed "extreme negativity" he's seen during his time in that office, "I'd like to say what an honor it has been to serve the City of Alva and its citizens. I've appreciated every moment and can truly say that every moment of work spent on this council has been to make Alva a better place. Alva is a great city. It has so much potential. It's a great place to live, work socialize and do business. I look forward to doing all of these things here for years to come.

"I did want to address some other things also, to address some of the extreme negativity that I've seen during my time on council. I thinks there've been some interesting times and topics that have come up, and I feel like there's a certain way to handle things. I'm pretty proud of the way that I handled things, and I hold myself to a certain standard.

"I just think a lot of social media stuff and things like creating Facebook groups or things like that, making nasty comments on social media – it's really something that I don't like. I think before you say something like that or do things like that, you should think to yourself, 'Could this be handled in face to face discussion? Can this be a quick phone call before I blast something out there that is inappropriate? Is there some sort of action that I can take or somebody I can talk to, to get more details before I make assumptions?'

"On that note, I think that making cuts and sticking your nose in the corner hoping things get better, that's only going to make things worse. I think taking initiative, action and calculated risks are the only way to compete in this forward-moving world.

"And lastly, I want to give my unwavering support to our city leadership and staff, our fire, police and EMS, our recreational complex, our hospital, our great public schools, our great Northwestern Oklahoma State University, our future swimming pool and our future state-of-the art multi-purpose arena. What an awesome, neat, opportunistic place Alva is!"

Mayor Kelly Parker replied, "Connor, you know you've brought a unique perspective, and I've appreciated it. You have been everything you've just said. You've not rushed to judgment. You have been respectful of process."

The mayor said he hoped whoever took Martin's seat "is going to have the same commitment to our community that you have."

A couple of days later in another meeting, Martin said that his work and personal lives are getting busier, and this caused him to resign.

In addition to his seat on the city council, Martin has chaired the finance committee of the council and served as the council representative on the Alva Tourism Tax Committee.

As finance chair, Martin told the council as of Aug. 31 the city had a cash balance of $3.2 million with investments of $1.6 million. In the first two months of the fiscal year, the city has collected 15 percent of budgeted revenue while expending 14.6 percent in expenses. August sales and use tax collections totaled $396,000 which was up 3.6 percent from August of 2021 and up 7.4 percent from July of this year.

Before going into executive session, Mayor Parker recessed the meeting and opened the Alva Economic Development Authority (AEDA) meeting. He said Dalton Beeler and Blake Jordan asked to step down from the Alva Pool Citizen Advisory Committee due to other commitments. He talked with Christy Vickers who is one of the founders of the Friends of Play organization because the swimming pool project will probably widen to include Hatfield Park. She agreed to serve on the committee and also recommended accountant Tricia Coday. The AEDA trustees (consisting of city council members) voted approval of the appointments. Coday was present at the meeting, and moving up this item gave her the opportunity to leave.

The AEDA meeting was then recessed, and the council meeting resumed with a vote to go into executive session to discuss the city business manager position.

Following a long executive session, the council returned to open session and took no action. Parker said he and City Attorney Drew Cunningham have been directed to start contract negotiations. He said as soon as there is news, the council members will be meeting.

The only other business conducted was passage of the consent agenda during each of the three city entities meeting.