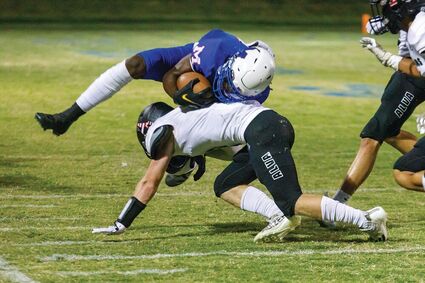 Goldbug Drew Glass takes the Falcon out at the knees to stop the play.

When the Goldbugs traveled to Millwood to begin district play Friday night, everyone knew the Alva team was facing an imposing opponent. In previous meetings the Millwood Falcons have almost always come out victorious. This game was no exception with Alva falling 66-16.

It didn't help that the Goldbugs were missing a couple of key players. Lantz Mathers sustained an ankle injury in the game against Fairview two weeks ago. Although he might have been able to play, it was decided not to risk it. In addition Aiden Faison was out due to an eligibility issue. Hunter Miller is still on the injur...