Missionaries, Ukrainian woman, give glimpse inside a brutal war 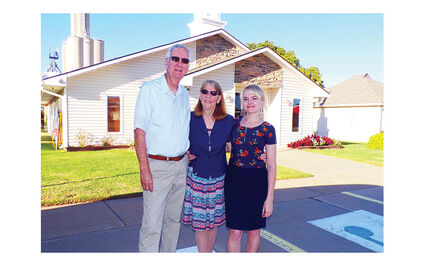 From left: Missionaries Ron and Nancy Minton stand with Tanya, who worked with them in Kharkiv, Ukraine, in front of Bible Baptist Church in Alva. Photo by Kathleen Lourde

Ron and Nancy Minton have been missionaries in Ukraine for about 17 years. They spoke this Sunday at Bible Baptist Church in Alva both about the Bible college they founded there, and about their astonishing experiences in Ukraine, particularly since Russia invaded.

"My background is as a professor," said Ron. "I have two and a half master's degrees and a doctoral degree, so I was a professor in the United States for most of my career." When he arrived in Ukraine, "I could immediately see they needed a Bible college."

Ukraine had been a constituent republic of the Soviet Union from beginning to end, 1921 to 1991, when the Union was disbanded. It was then known as the Ukrainian Soviet Socialist Republic, or Soviet Ukraine.

"In the Soviet days, there was no real Bible college," said Ron. "We know people who were sent to a Siberian prison just for carrying a Bible.

Tanya agreed. "Persecution was huge in Soviet times," she said. Even the Russian Orthodox Church was persecuted. "They wanted all people to believe only in communism and the Party and things like that. You know, they even brainwashed children to say "We need a teacher, not a preacher."

They heard many stories about life as a student under Soviet Ukraine.

"The students would be made to write on the chalkboard, "the teacher said everyone who goes to church is bad and everybody who goes to the communist party is good" Ron has even seen photos showing this. "They had a list on the blackboard and every student who went to church that week had to write their name on the chalkboard in front of the whole class while everybody booed them. That was very common.

Ukraine Before the War:

Ukraine and Russia grow one-third of all the wheat used in the world, Ron said. Ukraine is also the world's largest supplier of things like sunflower seed cooking oil. It's as flat as Kansas, but it's got extremely good soil.

"In fact," said Ron, "their soil is so good that in World War II when Germany invaded through Ukraine and dropped off tanks from the trains, they would scrape up Ukrainian soil and load it onto the train, and ship it back to Germany where they'd dump it on their farms."

In some ways, Ukraine is ahead of the U.S. For example, they already have high-speed trains. Ukraine also has the largest nuclear power reactor in Europe and it dates from the Soviet times. Before Russia invaded, they had a healthy aerospace technology, and Kharkiv was one of the education centers of the nation. Information technology was huge in Ukraine. And Ukraine had recently built five new international airports in major cities near where the Euro Cup was held. The Russians have destroyed three of those airports.

Nancy Minton declined to go on her husband's first few trips to Ukraine because she didn't know the language and felt she could be more useful stateside. But that changed. When she finally arrived there for her first visit, a group of little girls ran up and hugged her. Her heart was won over on the spot.

"I had great childhood in Ukraine," said Tanya, her soft voice caressing the words, her gentle smile bringing a glow to her pale face. "All my happy memories make we want to go back. I wanted to live my life in Ukraine, and I thought, you know, if you work, if you study" you can have the life you want. Except sometimes things get in the way, like an unprovoked war.

"I'm grateful for my country," said Tanya, who doesn't want to use her last name, "because I got a good education that will be good enough wherever I go, I think. (Tanya's degree is in computer engineering and business.) I wanted to get a good job and be able to travel, but always to come back to Ukraine. Ukraine is very beautiful. We have so many beautiful places. I love our towns and how everything is organized.

"Of course, we have problems, like everywhere. We have people living in poverty, but in general, my good memories are connected with my family and traveling, and with some home parties." She laughed, her eyes lost in memory. "In Ukraine it's tradition to invite family and friends for birthdays and holy days. We invite them to our house, mostly. We have a huge celebration with many kinds of dishes usually cooked by ourselves, though sometimes we get lazy and just buy something." She laughed. "But it was lots of fun."

What We Do Because of War

The three are traveling around educating and encouraging people to get involved, to help Ukraine and its people. They are also raising support from churches for their Bible college and other ministries in Ukraine.

"We get daily reports," said Ron. "Tanya talks every day to people in Kharkiv, the most-bombed city in Ukraine, and in several other cities. And some places are still being hit." Eastern Ukraine is where the Bible college started and it has classes in six cities now. They live in eastern Ukraine.

"We only live a short distance from Russia. Ukraine has, like, a 1,000-mile border with Russia. And they can still send missiles over the border into our cities. Our house and garage have both been hit by missiles or some sort of bomb," Ron said.

When she left Ukraine the first time after the war started, going to England, Tanya's friends said Russians had destroyed an oil refinery and many targets that have nothing to do with military purposes.

For example, a shopping mall was in use when hit by a big rocket. Some actually saw a missile hit a populated area. "And in Russia, of course, when they hit a place with people, they tell that they tried to destroy a military base. It is so horrible what they tell their people, how they brainwash them. I think it must be the greatest propaganda case in the world's history, one of the biggest.

"I hope that this mobilization will help. When it touches Russian's own lives, when it's your husband or your son, now you can see that they start to say "We don't want this war."

Although news broadcasts show traffic jams of military-age men trying to flee the draft, a lot of other countries don't want to allow those avoiding the Russian draft into their countries because Russia might start aiming missiles at them also. So a lot of military age men are trying to leave Russia, but they're not getting far." And "military age" in Russia right now has been raised to 65. "They're even recruiting prisoners and murderers."

Tanya thought that most likely Russia would soon impose some restrictions on military-age men leaving the country.

The brutality of the Russian soldiers haunts them.

"There have been proven a lot of cases of not only women and children that both were raped and then tied hands behind backs and shoot them," said Tanya.

"That's why we are so shocked at their cruelty," said Ron. "We never expected it could be like this." I think most Russian people are just normal people like us and do not want war.

When Ukraine began to recapture its territory, specialists were sent in to determine whether war crimes had been committed. They found about 400 mass graves in one city, "and today they found hundreds more," said Tanya. "And before those people were killed, they were tortured and things like that."

The Mintons came back to the States in January and planned to stay only four months, but found that they weren't able to return. Tanya has worked with them for almost two years, and by going through the Homeland Security program "United for Ukraine," they were able to bring her over.

Tanya found the experience of being a refugee in the U.S. very different from what she'd found in England.

"It's a huge difference," she said. "In England they give you money and they send some people to where you are living to help you with whatever you want: a job, a phone, utilities, just everything. And here, I felt kind of like we are left on our own.

"I think that Ukrainians who can come on their own probably have money. But if a Ukrainian is invited to come here by someone else (called a sponsor), these people help them.

Tanya doesn't know how to drive – she didn't need to know in Ukraine cities, which had great public transportation systems. But living with the Mintons in their rural Texas home, she sees that she can't get anywhere without asking Ron or Nancy to drive her. A situation few people would enjoy.

The best ways to help right now, according to Ron, is to write your representatives, including the president, and ask him to continue to send more HIMARS missiles, which have proven exceptionally effective, because they are satellite-guided. Soldiers can hit exactly what they aim for.

The retired generals are saying if they had 50 of those things, they could stop Russia from coming in, and if they had 100 of them, they could defeat Russia on any battlefield.

"The Russians haven't been able to knock out even one of them, because they're vehicle-mounted. They call it 'shoot and scoot.'"

From now to the end of year will be the decisive time, Ron thinks, because every day people are rebelling in his country. Even military people.

Another way to help is to sponsor a Ukrainian. 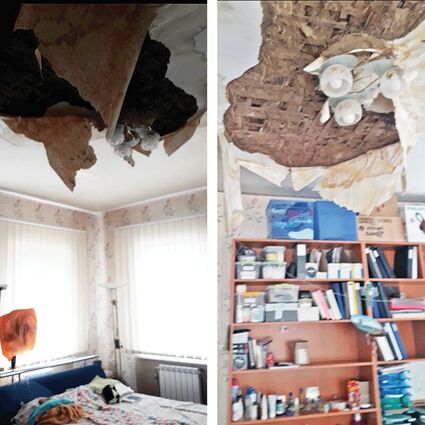 Both the Mintons' house (left) and office (right) were bombed. Photo courtesy of Ron Minton

"You have to send in a lot of documents to show that you have the ability to support the person and give them good lodging. We have a little house near Amarillo, Texas, and Tanya has a private room and bathroom. But we have to pay for all of it, and her transportation here.

"Last year, when I drove back from England, Ukraine had started to pave some roads and the trees were turning colors, yellow and orange; it was so lovely driving home on the smooth road.

"That's why it's really heartbreaking when you see this unfair destroying of my country. We had so many nice universities and places, and they just don't care. They launch and destroy them.

"They will be stopped. I believe in God's justice, and I believe the Ukrainian army will stop them with the help of the rest of the world. But the problem is how long will they continue with all the destructions? And how will we rebuild everything after the war is over?