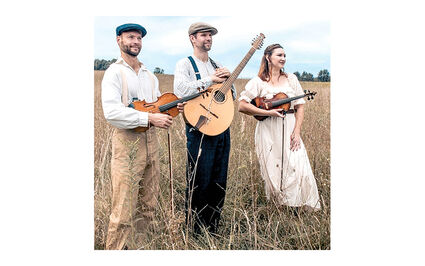 The Celtic band Poor Man's Gambit will perform in Northwestern Oklahoma State University's Herod Hall Auditorium at 7 p.m. on Oct. 11 as part of the Northwest Oklahoma Concert Series. The public is welcome to attend.

Hailing from Philadelphia, Pennsylvania, this band features a trio of instrumentalists playing fiddle, button accordion, guitar, bodhran and bouzouki, along with singing and dancing. With two of the members playing multiple instruments, Poor Man's Gambit is well-known for its ability to change instrumentation many times during a performance and offer several levels of musical depth to listening ears.

Comprised of Corey Purcell, Federico Betti and Deirdre Lockman, the trio said they are three friends who live, eat and breathe folk music and love what they do. Each player has experience with several diverse musical styles that complement each other.

Since its establishment in 2015, Poor Man's Gambit has released three albums, played hundreds of shows and festivals and completed two international tours. The group's latest album, "Land of Sunshine," offers a balance of spirited tunes with expressively performed songs. This increasingly popular Irish-American group performs at many festivals that emphasize folk music and honors Irish culture and heritage.

According to information from the band's website, most of the group's repertoire is rooted in Irish traditions, but some pulls from other provincial influences including England, Brittany, and Scotland, in addition to several original compositions including and air "Bear Mountain" and a reel "House on the Ridge."

The reserved seating section at each concert will be held until five minutes before the performance.

Stay up-to-date with NWOCS by liking the Facebook page at http://www.facebook.com/NorthwestOkCS. Keep an eye out for the hashtag #NWOCS.

Season tickets, as well as individual performance tickets, may be purchased online at http://www.nwocs.ludus.com or from Holder Drug or Graceful Arts Center.

Additional information may be provided by the director of the Concert Series Kimberly Weast, professor of theatre arts and Reichenberger Department of Fine Arts chair, at 580-327-8462 or [email protected]