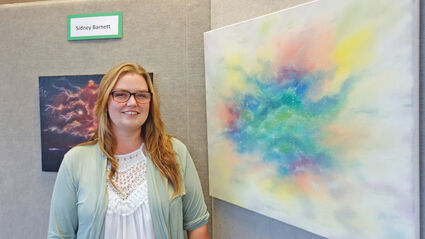 Sidney Barnett, an artist from Woodward, is featured in the "Pathways in Life" display at Graceful Arts Gallery in Alva during October.

As a young artist, Sidney Barnett experiences a lot of firsts. Friday at the Graceful Arts Gallery in Alva she had her first video interview. At first, she wasn't sure she could do it. She was extremely nervous. But eventually she spoke about how she began painting.

The Woodward artist's work is part of the October exhibit. Unlike the other two featured artists who are experienced watercolorists, Barnett paints in oils. Her paintings include imaginative renditions of the sky, especially at night.

Barnett says she did art for a long time in school. "It was probably my sophomore year, I decided to stop art and do different stuff – kind of a rebellion phase, if you will," she said.

Years later, she came back to art in what she described as a "silly" way. "The Bob Ross series got on Netflix, and Bob Ross was huge," she said. It drew her interest.

"I binge-watched episodes and episodes of Bob Ross," she said. "I was like, 'wow, if I do exactly what he does, I can do that, right?'"

She bought art supplies and tried things. She bought more supplies and tried more things. Eventually, she was "pretty good" at copying him. As she learned, Barnett began trying things on her own. "I took what I enjoyed the most out of what I was doing, which was the clouds in the sky, and then just played with color."

Some of her attempts didn't work out, but others did. She went from copying Bob Ross to inventing her own style. "It just kind of changed over time," she said.

As for her inspiration, Barnett said, "It's just kind of how I feel in the moment." She likes to play with color as she works in her garage.

"I really enjoy it, so I just do it," she concluded.

A video of Barnett's interview may be viewed at http://www.AlvaReviewCourier.com.