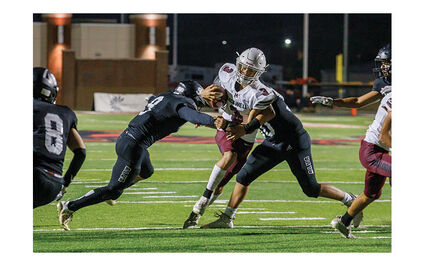 Reichen Kraft (9) and Bo Stewart (50) take down the Blackwell offense.

With his team decimated by injuries, Alva head football coach Dave Foster had to pull out some less-practiced plays for Friday night's game. It seemed to work as the Goldbugs defeated the Blackwell Maroons 44-17 at Ranger Field. With a 1-4 season record, the Goldbugs really needed the win, their first in district play.

The game began on a high note for Alva. After winning the coin toss, the Maroons elected to receive. But as James Tripp handed off the ball, it came loose, and Alva's Allie Pollock scooped it up, running to the Blackwell nine-yard line.

Alva's offensive team lined up, and quarterback Daylon Malone carried the ball, making it within a yard of the goal. From there, Malone snuck into the end zone for the first touchdown of the game. The two-point conversion was good, and Alva was on the scoreboard 8-0.

Blackwell brought in Zaden Frederick at quarterback, who dropped the ball, recovered it and gave it to Zaine McDonald who made the first down. Two more runs by McDonald resulted in another first down at the Alva 42. Pollock stopped McDonald at the line of scrimmage on the next play. Then as Frederick was threatened, Malone stripped the ball from his hands and ran all the way to the end zone for a second touchdown. Malone followed the 55-yard TD with a successful two-point conversion run, and Alva led 16-0.

After the kickoff, Blackwell started at their 26 yard line, steadily advancing on runs by McDonald. The Goldbug defense was beginning to cut down McDonald's yardage, but he was still effective. McDonald finally made it to the Alva one-yard mark and ran the ball in. It took 14 plays to cover the 42 yards, and Blackwell was now on the scoreboard. Tripp ran for the extra two, and the score stood at Alva 16, Blackwell 8.

After the kickoff, the Goldbugs began at their 26 yard line. On the second play as Malone handed off to Drake Wharton, the ball came out, and Blackwell recovered the fumble.

Starting at the Alva 29, the Maroons made a first down on a McDonald run. Then Tripp faked a handoff and kept the ball. Alva's Phillip Randall finally stopped him at the four yard line as the quarter ended.

McDonald ran the ball from the four to just inside the one yard line to begin the quarter. Tripp handed off to McDonald, but he was tackled and the ball came out with Alva recovering.

Although the Goldbugs had the ball, they had terrible field position just five yards from their own goal. Wharton ran the ball for four yards, but then Malone lost a yard on a keeper. Malone tried a little swing pass to Wharton who broke loose and covered 93 yards for the touchdown. The two-point conversion failed, but Alva now led 22-8.

Blackwell had a big return on the kickoff by Trace Hamilton, setting up at the Alva 44. After gaining only one yard in two plays, the Maroons brought in Frederick at quarterback. He passed to Tripp who made it to the Alva 25. On the next play, McDonald broke a tackle and was headed for the goal until Randall brought him down at the four. On the next play, McDonald was pushed back a yard. Then a low snap caused Frederick to fumble. He recovered but the Maroons lost another yard. Now at the Alva six, Tripp came in as quarterback and passed to Skyler Landwehr, but it was incomplete. With six yards to the goal on the fourth down, Blackwell brought in Cameron Short who kicked a field goal for three points. The score stood at Alva 22, Blackwell 11.

On the next series, Alva was held to seven yards before having to punt.

From the Alva 42, the Maroons advanced to the 19 yard line. Another fumble set them back six yards as Tripp fell on the errant football. Frederick came in as quarterback, and he was promptly sacked by Pollock, Hamilton and Wharton. On the fourth down, Frederick tried to throw on the run and was sacked again.

Alva took over on their 38. Wharton ran to the Blackwell 31 for a first down. Then a false start set the Goldbugs back to the 36. This time Malone was sacked by Blackwell's Payton Jones, moving the ball back further to the 46. There was time for a handoff to Wharton before time ran out. The half ended with Alva leading 22-11.

It was now Alva's turn to receive the kickoff. Weston Tucker ran the ball from about the 15 to the 31. After an incomplete pass, Wharton ran for five yards and Malone gained another four. Then Blackwell was called for movement before the snap, and Alva had the first down.

After a three yard gain, the speedy Wharton found room to run, covering 47 yards before being stopped a yard short of the end zone. On his next try, Wharton was pushed back a yard. Then Malone kept the ball to run in for the touchdown. A two-point conversion pass failed, and Alva now led 28-11.

Blackwell took over on their 36 after the kickoff. Three carries by McDonald resulted in three first downs. Now at the Alva 22, Tripp kept the ball to gain nine yards, and McDonald took the football to the Alva 11. On the next carry, Pollock knocked McDonald back a yard. Tripp tried a quarterback keeper, but Randall stopped him three yards short of pay-dirt. On the next snap, Tripp kept the ball but it came out of his hands during the tackle. Jordan Lohmann grabbed it for Alva and turned on the jets. He ran 97 yards for the touchdown. Wharton was successful taking the ball in for the extra two points. Alva now led 36-11.

Following the kickoff, Blackwell progressed from their 30 yard line into Alva territory before the quarter ended.

Frederick connected on a pass to Tripp to begin the final period, putting Blackwell at the Alva 23. After losing a yard on the next play, the Maroons were penalized for a false start. Frederick kept the ball to gain three yards. Then another false start set the Blackwell team back to the Alva 31 with two plays left to cover 18 yards. Frederick connected with McDonald on a pass, but Hunter Pfleider immediately tackled him for no gain. One more pass attempt by Frederick was caught by Landwehr but he was also stopped immediately.

Alva took over on their 16 yard line. Two runs by Wharton put the Goldbugs on the 37. Malone kept the ball to gain two more yards. Then Malone threw the ball to Tucker who ran all the way for the touchdown. The 61 yard touchdown pass play was followed by a successful two-point conversion by Wharton. Alva led 44-11.

Blackwell wasn't ready to give up. After the kickoff, they started at their 48 yard line and steadily advanced. At the Alva 30, Tripp ran up the middle on a quarterback keep and scored. The two-point conversion failed, but the Maroons had narrowed the lead to 44-17.

After the kickoff, Alva was at their 41. Malone was running when he was tackled and the ball came out. Blackwell recovered. 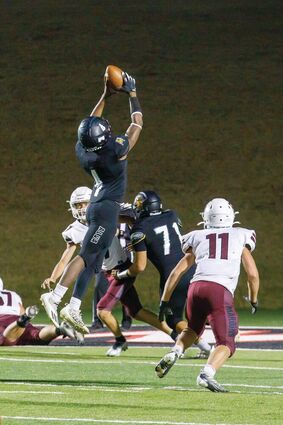 Alva's Drake Wharton (4) jumps up to catch the ball thrown by Daylon Malone.

The Maroons had the ball for two plays before they fumbled, and Alva recovered. If you're counting, that's six fumbles for Blackwell and two for Alva.

The Goldbugs took over at the Alva 36, moving the ball into Blackwell territory to the 39 before time ran out. The final was Alva 44, Blackwell 17

Alva is now 2-4 on the season. The Goldbugs will continue district play next week with a home game against the Chisholm Longhorns. As is traditional, the Fall Break game will be played Thursday night instead of Friday with kickoff at 7 p.m.