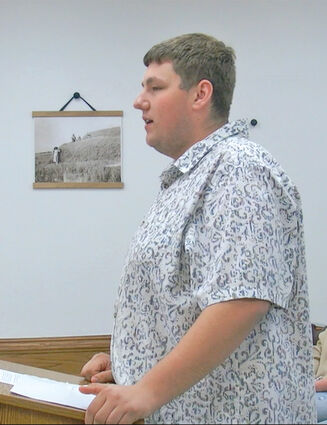 At a public hearing Monday, Joe Parsons tells the Alva City Council about the dilapidated condition of property at 827 Maple.

Although Alva City Council members were provided with some pictures, Joe Parsons distributed more photos he had taken of 827 Maple St. He told the council Monday that he has filed numerous complaints about the condition of the property. In his photos, the grass was shorter than usual, Parsons said. When it is mowed, the grass is always thrown into the street which is a violation of city code.

Parsons said there are holes in the roof, and the two structures provide homes for skunks, raccoons and mice. One of his photos captured some deer hanging out on the property.

City Inspector Adam Grimsley reported that a certified letter had been mailed to the owner in Texas, as recorded on property records at the courthouse. He received notification that the letter had been delivered and a signature obtained. The letter was mailed Sept. 13 and the certified receipt was dated Sept. 14.

A legal notice was published in the Alva Review-Courier on Oct. 9 and Oct. 16 about the public hearing. The owners are listed as McGill heirs.

Councilmember Troy Brooks said there are family members living in Alva. He asked if they had been contacted. Grimsley said he notified the property owner he found in the records filed at the courthouse.

Grimsley said he has received no response to his letter. If the city council declared the property dilapidated, the next step would be to go out for bids for someone to demolish the two buildings. After demolition, the city will pay the costs and bill the property owner. If the bill is not paid within 60 days, it will be filed as a lien on the property.

The city has budgeted $15,000 this year for handling dilapidated structures.

After the public hearing was closed, the city council moved on to action. Daniel Winters made a motion for a declaration of dilapidation for 827 Maple with appropriate action to abate the nuisance, and Sadie Bier seconded. The motion carried 7-1 with Brooks voting no.