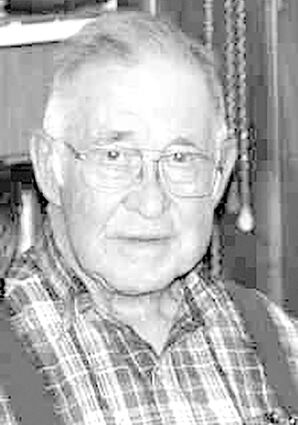 Rosary will be held on Thursday, October 27, 2022, at 10 a.m. at Saint Boniface Catholic Church, Sharon Kansas. Celebration of Life will immediately follow with Father Emmanuel Kosikumah officiating. Online condolences may be made at http://www.whartonfuneralchapel.com.

Richard Leon Hendricks was born in Anthony, Kansas, on December 29, 1925, to Burns and Carrie Hendricks and passed from this life on October 19, 2022 at the age of 96.

Richard grew up on his parent's farm south of Capron, Oklahoma, where he worked with them and later in life took over the farming business. It was during this time, he met his first love, Wenonah King, whom he married on August 3, 1945 and loved faithfully until her passing in 1982. To this marriage four children were born, Wanda, Dewayne, Lonnie and Susan. It was on this farm that he and Wenonah shared their lives, raised their children and later it was where his grandchildren and great-grandchildren played, explored and built memories that have lasted a lifetime.

On September 8, 1984, Richard was happily united in marriage to Monica Ricke whom he was fortunate to share his life with until her passing in 2011. With his marriage he added to his family Robert, Vicky, Annette, Alice, Barbra, Helen, Jeff, Terry and Janet. Richard also had many grandchildren and great grandchildren that he loved and cherished as his very own. His gentle soul and loving spirit impacted each one uniquely.

Richard served overseas during World War II for the United States Army until he was honorably discharged in 1948. After returning home, Richard continued his work on the farm as well as working as a carpenter for a brief period. Richard was also a member of the Lions Club, the American Legion and was a volunteer firefighter with the Capron Fire Department. Even after leaving the area, he continued to volunteer to prepare food and help serve at the annual Capron Fire Department Thanksgiving dinner.

Those who knew Richard knew he was a man of numerous talents and could accomplish nearly anything he set his mind to. In addition to his carpentry skills, Richard loved photography and set up a dark room in his basement so that he could develop his own film. Later in life he learned how to use a quilting machine to help Monica with projects for his family but his true passion was woodworking. He was an artist in his own right with his many creations from bowls, pen sets, pocket watches, kaleidoscopes, and baby rattles just to name a few. He was very clever and appreciated a challenge whether it was taking up a new hobby or creating his own jig when he wanted a certain design for his project.

He was preceded in death by his wife, Wenonah, and his daughters, Wanda and Susan, wife Monica and a daughter Janet.

In lieu of flowers, the family asks that a donation is made to the Medicine Lodge Senior Citizens Center.

"So with you: Now is your time of grief, but I will see you again and you will rejoice and no one will take away your joy." John 16:22