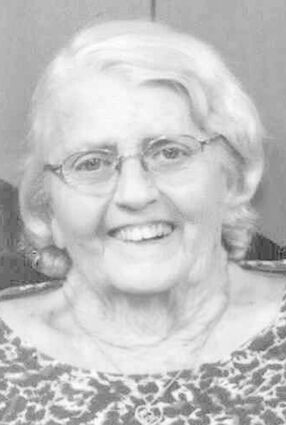 Funeral services for Maxine Utterback, 83, will be at 2 p.m. Tuesday, Nov. 15, 2022, at the Wharton Funeral Chapel in Alva with Rev. Bill Kalfas, pastor of the William Church of the Nazarene, officiating. Interment will be in the Alva Municipal Cemetery with Wharton Funeral Chapel in charge of arrangements. Condolences may be made online at http://www.whartonfuneralchapel.com.

Maxine attended and graduated from Ferry High School. While in high school she loved to play basketball. The girls all called her "dishrag" because of the way she was able to move around the basketball court. She was also a contestant in the Miss Cinderella Pageant here at Northwestern as Miss Ferry, Oklahoma. She also attended college at Northwestern for three years taking business classes (she traded in her BS for MRS).

Miss Gum was married to Bill Utterback on May 15, 1960, at the Alva Nazarene Church. To this union five children were born Frank, Danny, Darla, Tim and James.

They made their home in Alva where Bill worked at the Golden Krust Bakery, and Maxine was a stay-at-home mother. In 1963 they moved to Avard and then moved to a farm northeast of Avard in May 1981. Upon Bill's retirement they moved to Alva in 2012 to make their home to enjoy retired life.

Maxine was preceded in death by her parents; two sons, Tim and Frank, and two grandchildren, baby Elizabeth and Ryan.

She is survived by her husband Bill of the home and her three children Danny, Darla Coulter and James, all of Alva; six grandchildren: Jason, Bridget, Megan, Derek, Devin and Taylor; seven great grandchildren: William, Christopher, Rydlee, Aidyn, Serinity, Timothy and Mary; a brother Garold and wife Lois Gum of Oklahoma City, a number of nieces and nephews, other relatives and friends.

Memorial contributions may be made in her memory to St. Jude Children's Research Hospital through Wharton Funeral Chapel.