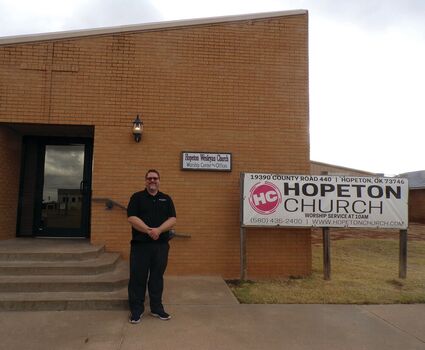 Pastor Drake stands in front of Hopeton Church. The banner will soon be replaced with a sign. The empty area to the right, behind the bannner, is where the original church once was.

Marty Drake Colvin is a big man. It's easy to see the former Marine in him; easy to see the eight-and-a-half years he spent as a state trooper, the years as police chief in Cherokee and Beaver. If Hopeton Wesleyan Church is ever in need of a bouncer, the congregation won't have to look far.

Colvin is also a big laugher. His laughter boomed out repeatedly during a conversation that ranged from his obvious pride in his young daughter, already a professional actor, to what it feels like to speak in tongues.

Who He Is, Where He's From

Colvin grew up in Cedar Rapids, Iowa, until his parents got...