Dancing through the decades 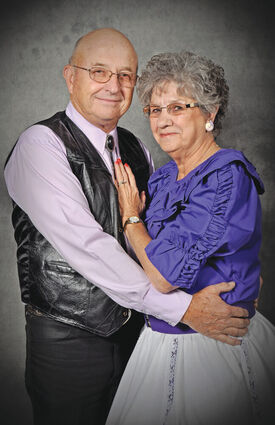 The past 32 years weren't a slow dance for Rod and Lois Ford, but they danced through the decades anyway.

They managed a business, cared for their family and joined community organizations in the small Ellis County town of Gage. Yet they made time for something they enjoyed: square-dancing.

They served for years as callers for square-dance clubs across Northwest Oklahoma and the Texas Panhandle, spending countless hours memorizing dance movements and song lyrics. And after years of dedication to square-dance calling and teaching, the two were inducted into the Oklahoma Square Dance Hall of Fame on Nov. 5, becoming one of a handful of couples to be honored for their leadership on the dance floor.

Though Lois died in March, Rod continues to call square-dances and help clubs across the region, sustaining their square-dancing legacy by helping others follow in their footsteps.

Giving It a Whirl

It all started in 1952. Rod's parents were part of a dancing club in Glazier, Texas, where he first learned about square-dancing. During high school, he was a member of the Tri-Town Twirlers in Gage, Oklahoma.

"I danced there for two or three years and had a ball with it," Ford said. "I never did really forget it."

His square-dancing was interrupted for several years. He started college at Sayre but transferred to Northwestern Oklahoma State University in Alva, graduating in 1967 with a degree in history and general business. He went to law school at the University of Oklahoma, but after a little more than a semester, he realized that being a lawyer wasn't for him.

"I didn't see a point in spending any more money," he joked.

He soon enlisted in the U.S. Marine Corps, serving as an officer in charge of a supply warehouse in southeast Asia. He remained in the reserves for 27 years after returning home, retiring as a colonel in 1998.

Rod and Lois met in 1980, and they married the next year. They raised their family and ran the family feed mill, but for several more years, something was missing: square-dancing.

"When Lois and I got married, people asked us all the time, like they do, 'You've got to get into square dancing. You've got to do it,'" Rod said.

Finally, they signed up for a dancing class, graduating in 1990 from Don Main's Red Carpet Square Dance lessons. The couple was immediately elected vice president of the Red Carpet Squares Club in Gage.

"We didn't have a clue how to do it," he said of the vice president's job. "We kind of went from there."

Two years later, Rod began calling dances in Gage as an amateur, but he wasn't able to attend caller college because of his work schedule and continued reserve service in the Marine Corps. Lois, however, attended school and recorded the lessons. She brought them home, where she and Rod studied them together. They even practiced movements using dolls.

Both continued to learn more about dance-calling from professionals and joined callers' organizations, allowing them to oversee dances across the Midwest. Lois was a member of Callerlab, and Rod was a member of the American Caller's Association.

The two held the offices of secretary and treasurer, among others, in the Northwest District of the Oklahoma Square Dance Federation for more than 20 years. They were affiliated with several square-dancing chapters and organizations, including the Alva Twisters Club, Perryton (Texas) Promenaders, Northwest Singles and Doubles and Levis 'n Lace.

While Rod and Lois both called dances, each had a specialty.

Lois was a gifted caller with a low, clear voice, Rod said.

"She studied under some really good people," Rod said. "She was an excellent line dancer. She wrote some line dances, and she wrote some music. She was a lyricist. She would take a tune and change the lyrics, and they really came out good."

Rod, on the other hand, would rather teach and dance more than call. He gave his first lessons in 1995, and he still drives to both Perryton and Alva each week to teach lessons to new and experienced dancers.

"I still like to dance," he said. "As a matter of fact, I'm a way better dancer than I am a caller."

Some of his students say he's equally talented in both areas. Leticia Salazar, a square dancer in Perryton, said Rod is an exciting and caring teacher. With years of experience under his belt, Ford knows square dancing by heart.

"It's so natural for him," Salazar said. "He's patient. He's your friend. He expects us to trust how he explains every move until we understand it. ... He never gives up on you."

"He tries to work with each and every one of us," Evans said. "If he notices that somebody messed up, he tries to go back and work on that. He watches, and he knows if we're in the right places. He'll walk you through it. He's one of the best callers around here."

Rod said he was caught off guard by his hall of fame induction, which took place during the square dancing federation's annual convention in Oklahoma City.

"I didn't really know what was taking place or I would have dressed a little better, but it worked out OK," he said. "It's an honor to be considered."

Square dancing isn't as popular as it used to be. Rod knows the name of almost every club that once existed in the region, and most are closed now.

"It's gone downhill pretty sharp," he said. "I'd like to see it grow and flourish. ... It's exercise set to music, and it works for your mind and your body."

The workout isn't what kept Rod and Lois involved for so many years, though.

"We had a good life," Rod said. "Square dancing is just a great hobby, is what it is. Great fellowship is a lot of it. You can't beat it for the fellowship. Almost everybody in there has a good time."